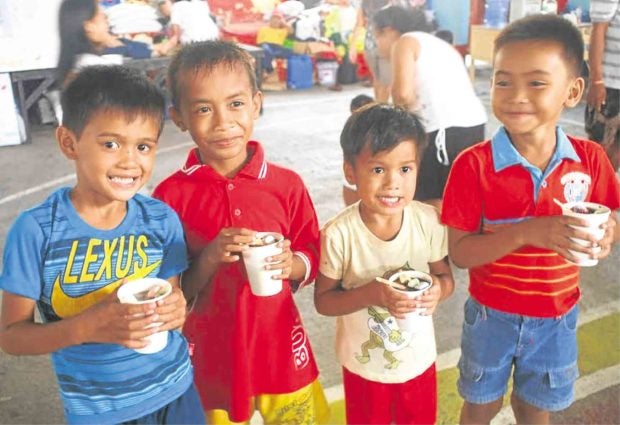 The coins came from the piggy banks of children, the earnings of tricycle drivers, a housewife’s fund drive and children wanting to reach out to the victims of the conflict in Marawi.

Negrense Volunteers for Change (NVC) Foundation kicked off a campaign to send Mingo, an instant meal made of rice, monggo and malunggay, to thousands of children in Marawi, less than a week after the fighting erupted in May.

The group has sent 388,775 packs of instant meals to Marawi children staying in evacuation sites.

“As soon as we knew evacuees were converging in centers, our hearts bled and we were tempted to immediately shout out for people to help,” NVC president Millie Kilayko said. “But we carefully chose trustworthy ground partners in Iligan City, who could efficiently carry out the task.”

She said their first shipment arrived in Iligan on May 31, about a week after the fighting erupted.

As of end of June, NVC had listed 15 government and nongovernment groups as partners. They distributed the Mingo meals brought by volunteers to evacuation sites and to areas where evacuees were staying.

The group’s campaign to raise funds for the Mingo meals through social media snowballed.

Eight men from Hinigaran town in Negros Occidental province, who received tricycles from NVC’s livelihood project three years ago, turned over P5,800 of their earnings, enough to buy 1,000 Mingo meals.

Pia Golez Camus, a mother of four and a resident of Metro Manila, started a “begging” mission to collect funds for the children of Marawi.

She distributed tin cans to her fellow volunteer housewives with an appeal for people to drop their coins to feed the children of Marawi.

“People are just waiting to be asked for help,” she said.

Camus said she decided to appeal for coins because it makes it easier for people to want to donate.

“I have a very deep respect for coins now,” she said. “[It’s such a waste that] these are just left around, discarded.”

She said a donation of P5.80 could already feed a child.

“If more people put coins in tin cans more children of Marawi could be fed,” she said, adding that P40 could already feed seven children.

Isa Lovina, who produces children’s dresses, sent in a 5-kilogram piggy bank, which her 10-year-old grandson, Sebastian, a sixth grader at Xavier School in San Juan City, wanted to give to the children of Marawi.

From the donations of more than 50 people, most of them her former students, retired teacher Bugsy Lopez Bongco was able to send 58,924 Mingo meals to Marawi.

Aside from donating their school allowance, brothers Diego, 13, and Andreo, 12, Barrientos started a “Change for Change” drive at the law office of their Negrense mother, Reggie Jacinto-Barrientos, in Makati City to raise funds for Marawi evacuees.