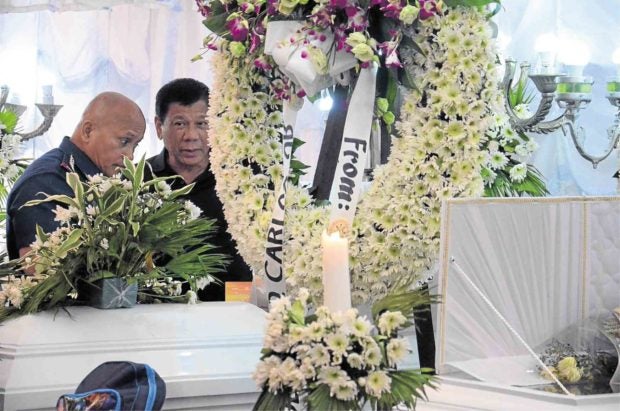 CITY OF SAN JOSE DEL MONTE — One of two men linked by a suspect in the killing of five members of a family in this city was found dead on Tuesday morning, hours before President Rodrigo Duterte visited the victims’ wake here.

Carmelino Ibañez, who confessed to killing the three children, wife and mother-in-law of bank security guard Dexter Carlos Sr. on June 27, recently implicated two other men in the crime.

Police said they discovered the body of Rolando Pacinos at 6:30 a.m. Tuesday.

Identified initially as “Inggo,” Pacinos was found under a tree along Palmera Drive here, strapped with a placard that says, “Addict at rapist, huwag tularan (Addict and rapist, do not emulate).”

He was wearing a pair of shorts and had no shirt.

Supt. Fitz Macariola, city police chief, said Pacinos, 54, was one of two men whom Ibañez identified as his accomplices.

‘There will be justice’

Mr. Duterte learned about the death when he visited the wake of Carlos’ family at a basketball court in North Ridge Royale Subdivision.

He said: “There will be justice. Papaano (How)? I do not know. Sabi nila patay na yung isa (They say one has died).”

Mr. Duterte looked very solemn when he observed that the schoolbags and uniforms of 11-year-old Donny and 7-year-old Ella were displayed on top of their caskets.

The children, including 1-year-old Dexter Jr., were found dead from multiple stab wounds inside a room by their father when he returned home from work in Makati City.

Carlos said he welcomed the decision to hold a parallel investigation by the National Bureau of Investigation, saying he needed all the help he could get.

Mr. Duterte informed Carlos he would be granted free housing by the National Housing Authority, after he gave the security guard P275,000 in cash and a mobile telephone.

“If there is anything you need, call me,” the President told Carlos.

The President also chided human rights activists who remained critical of his hard-line stance against illegal drugs, saying they should “tell criminals to stop their goddamn shit para [so] there will be no more killings.”

“If I catch you stabbing somebody will I say, ‘I’ll wait for due process?’ I will just kill you,” Mr. Duterte added, before stressing he would not interfere with the ongoing investigations. —Carmel Reyes-Estrope