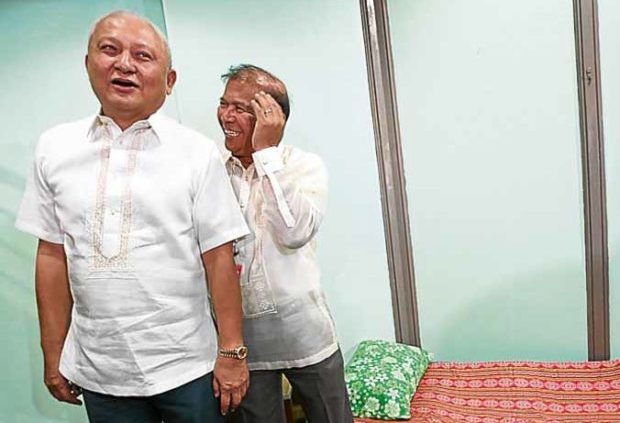 On Tuesday, July 4, 2017, Rep. Johnny Pimentel (left) and House Sergeant at Arms Roland Detabali present a room at Detabali’s office which they said would be where Ilocos Norte Gov. Imee Marcos would be detained if she would snub a House summons. (File photo by NIÑO JESUS ORBETA / Philippine Daily Inquirer)

The House of Representatives held in abeyance its show cause order to the Court of Appeals (CA) justices who were earlier ordered to explain why they should not be cited for contempt for granting the writ of habeas corpus of the six detained Ilocos Norte provincial government officials.

In an ambush interview with reporters on Tuesday, Surigao Del Sur Rep. Johnny Pimentel, who chairs the House Committee on Good Government and Public Accountability, said the panel decided to hold in abeyance the issuance of the show-cause order pending the court’s decision on the motion for inhibition filed by the House against the appellate justices.

The committee earlier issued the show cause order against CA Associate Justices Stephen Cruz, Edwin Sorongon and Nina Antonino-Valenzuela, further worsening the clash between the legislature and judiciary.

The House sought the three appellate justices’ inhibition from the case as it also ordered them to explain why they should not be held in contempt for insisting on its grant of the privilege of writ of habeas corpus for the Ilocos Norte government officials detained in connection with the House probe on the alleged tobacco funds mess.

The officials – Genedine D. Jambaro, Encarnacion A. Gaor, Josephine P. Calajate, Eden C. Battulayan, Evangeline C. Tabulog, and Pedro S. Agcaoili Jr – have been detained at the Batasan Complex since May 29 after being cited for contempt for failing to answer responsively the questions during the probe.

“Kung naalala niyo, I already signed the show cause order why they should not be cited for contempt, but considering that on June 29 we filed for a motion for inhibition, so we would just await muna if the three justices will inhibit,” Pimentel said.

Pimentel said the House would wait for the appellate court to rule on the motion seeking the justices’ inhibition from the case before issuing the show cause order.

If the House would not satisfied with their answers to the show cause order, the committee would order the arrest of the three justices, which could further escalating the clash between the legislature and judiciary.

“We hold the show cause order until such time our motion for inhibition to the justices will be acted upon,” Pimentel said.

Earlier, Pimentel said the House would not shirk away from its duty to detain persons for contempt, even if these would involve justices.

Meanwhile, Pimentel denied that the House threatened Ilocos Norte Gov. Imee Marcos when reporters were taken on a tour Monday to the detention area of the governor.

READ: Imee can do her job online while in detention – House leader

The House implicated Governor Marcos on the misuse of tobacco funds which were allegedly misspent on minicabs, buses and minitrucks for the different Ilocos Norte municipalities, even though the law – Republic Act 7171 – that imposed the tax on Virginia cigarettes states that the excise tax should be used for livelihood projects and infrastructure projects benefiting the tobacco farmers.

Pimentel said it was the media who asked the committee to conduct a tour. The committee earlier sent an email to House accredited media inviting them to a tour of the detention area.

“We are not trying to intimidate or harass,” he added. “We just showed you that the House of Representatives is very much ready to detain any person whether she is a public official or public employee.”

Ilocos Norte Rep. Rodolfo Fariñas, the majority leader and Marcos’s political rival in the province, initiated the probe, in what is believed to be a political inquiry setting the stage for an expected face-off between the Fariñases and Marcoses, political rivals asserting dominance in Ilocos Norte, in the coming 2019 elections.

Speaker Pantaleon Alvarez earlier said the House might be forced to file an impeachment case against Chief Justice Maria Lourdes Sereno for allegedly ordering the CA to defy the show cause order asking three CA justices to explain why they should not be cited for contempt.

Following his refusal to release the detained Ilocos Norte provincial employees, Fariñas was declared persona non grata in his own province by the Sanggunian Panlalawigan. He vowed to retaliate by filing graft charges and seeking damages from the provincial board for declaring him an alien in his own district. –With a report from Celine Amilhamja /atm