Imee can do her job online while in detention – House leader 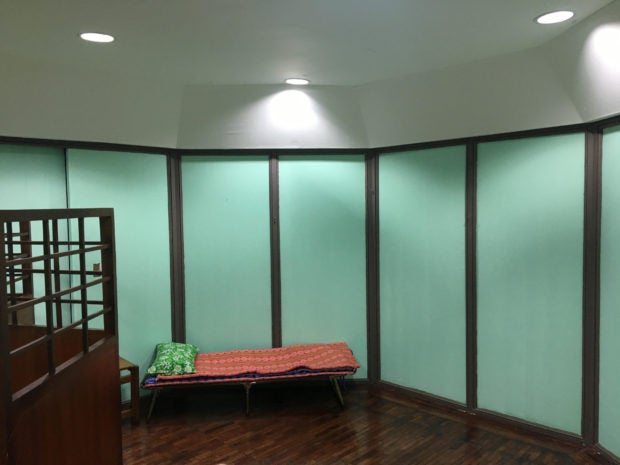 Governor Imee Marcos would have her own reception area, private area, and a toilet with a hot shower in her “hypothetical” detention room at the Office of the Sergeant-at-Arms, near the rooftop of the House of Representatives’ South Wing. The House of Representatives has threatened to arrest and detain Governor Marcos if she refuses to appear at a House inquiry on the use of tobacco tax funds. (PHOTO BY VINCE F. NONATO / INQUIRER)

MANILA —  If Ilocos Norte Governor Imee Marcos snubs the House of Representatives’ inquiry into the province’s alleged misuse of tobacco tax proceeds, she could still do her job in detention at Batasang Pambansa because it would be equipped with Internet connection.

The air-conditioned facility, which Pimentel said was roughly 70 to 80 square meters in size, has a reception area and a private area separated by a partition. There was only a metal cot with mattresses—which Pimentel said Marcos could replace with her own bed—a table with monobloc chairs, and an electric outlet in the room. Beside the room is a bathroom with a hot shower currently being repaired.

Asked if Marcos could still do her job if she was ordered detained on a contempt citation, Pimentel said: “Probably, she can.”

There are “three layers of security” to hurdle before a person can get to the detention room reserved for Marcos. After reaching the third floor, one has to pass through a corridor first before walking out onto a rooftop. There would be another door to get back inside on the way to Detabali’s office.

It is much easier for the casual visitor to reach the “hypothetical” detention rooms for the three justices of the Court of Appeals Special Fourth Division who ordered the release of the so-called Ilocos Six provincial officers, whose unsatisfactory answers led to their detention since May 29.

Found on the third floor of the building’s North Wing just a short walk away, it actually used to house the Congressional Spouses’ Foundation, Inc.—which Speaker Pantaleon Alvarez kicked out from the complex in February supposedly to make way for office space for deputy speakers and party-list representatives.

The air-conditioned, wood-furnished area, partitioned by two walls into three rooms, is almost empty except for desks and cupboards.   Still, while each room is similar in size to Marcos’s “hypothetical” cell, the former CSFI office actually has windows. There is also no corridor to snake through. 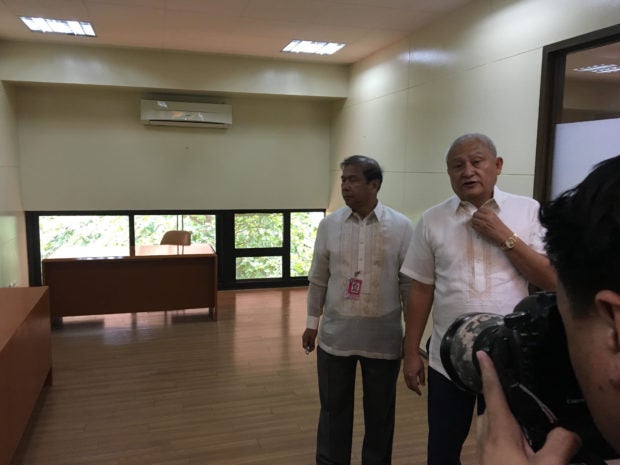 The former office of the Congressional Spouses Foundation, Inc. at the House of Representatives’ North Wing may be converted into a “hypothetical” detention room for the three Court of Appeals justices. (PHOTO BY VINCE F. NONATO / INQUIRER)

According to Pimentel, there is effectively no “special treatment,” because the Ilocos Six enjoy practically the same perks and the same freedom to use the Internet. In fact, one of the detainees, provincial treasurer Josephine Calajate, was able to throw a birthday party for her husband during the June 26 holiday.

Although he showed reporters around, Pimentel was tentative in threatening Marcos and the justices with arrest.

“She’s not an ordinary person, but an incumbent governor and a Marcos at that. You know very well how powerful the Marcoses are. It will be more difficult to arrest Gov. Imee Marcos in this case,” Pimentel said.

He appealed instead for the governor to “please attend the hearing” because “we are not going to do anything to Imee Marcos, we will not detain her… we will just ask questions.”

Marcos actually issued a statement on Sunday, through her lawyer and former Solicitor-General Estelito Mendoza, announcing that she “is willing to cooperate” with the inquiry—if it would be conducted properly in aid of legislation and if the rights of persons appearing there would be protected.

Earlier, Governor Marcos said in a June 23 press conference that “I want to explain myself in Congress” but her brother, former Senator Bongbong Marcos, advised her not to because she “could also be detained.” This prompted Pimentel earlier to go on an offensive and declare the House was ready to detain her for contempt.

“Well, she has conflicting statements. Now, she has a new statement that she will cooperate; however, it’s very ambiguous. She’s citing conditions under the Constitution regarding the rights of a person. So, I feel she would not really attend,” Pimentel said.

Meanwhile, the House committee has yet to serve its show-cause order requiring CA Associate Justices Stephen Cruz, Edwin Sorongon and Nina Antonino-Valenzuela to explain why they should not be cited in contempt.

Pimentel explained the committee held it in abeyance for now, because of Detabali’s pending motion for the inhibition of Cruz and Antonino-Valenzuela from the habeas corpus petition of the Ilocos Six detainees.

Cruz’s inhibition was sought for having allegedly prejudged the case when he answered the Judicial and Bar Council’s regarding the looming tussle between the co-equal branches of the House and the judiciary. Meanwhile, Antonino-Valenzuela was said to be married to a former associate of the Ilocos Six’s lawyer Mendoza.  SFM