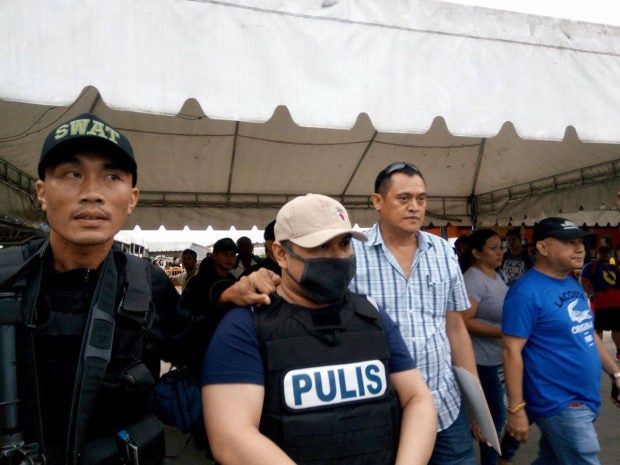 TAGBILARAN CITY, Bohol — The alleged mastermind in the killing of environmental lawyer Mia Mascariñas-Green was back in Bohol on Monday, three days after he was captured in Davao City.

Lloyd Lancer Gonzaga, 34, arrived at Tagbilaran Port at 5:15 p.m.from Cebu City where he was brought first following his arrest at his house in Barangay 23-C, Juan Luna Street in Davao past 3 p.m. last Friday.

From the port, he was immediately brought to Judge Leo Moises Lison of the Regional Trial Court Branch 3, Judge Lindecita Cabaron- Arcamo of RTC Branch 1, and Judge Jorge Cabalit of RTC Branch 48 who issued separate arrest warrants for murder, four counts of attempted murder and illegal possession of firearms.

Gonzaga is now detained at the Tagbilaran City Jail, according to Supt. Rene Kyamko, chief of the Provincial Intelligence and Detective Management Branch of Bohol Police Provincial Office.

Police said Gonzaga was with his three cohorts when they ambushed Green who was with her three young children and nanny while on their way home on Feb. 15.

Dispute over a prime property on Panglao Island where most of Bohol resorts were located, was eyed as a motive in the killing.

Green was the legal counsel of Gonzaga’s mother-in-law Conrada Blomqvist who accused him of grabbing her property in Panglao. The “Justice for Mia, Kalinaw sa Bohol Movement” was elated of the arrest of Gonzaga.

But the members were hoping that the alleged gunman, Romarico Benigi-an would finally be arrested.

“The search for Romarico Benigi-an continues. Benigi-an has to answer for the gruesome murder of Atty. Mia Mascariñas-Green, too,” the movement said in a statement.  SFM