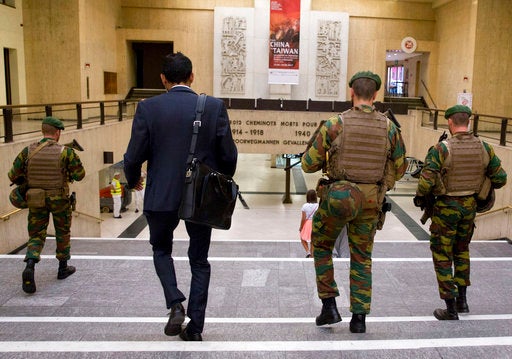 Belgian Army soldiers patrol inside Central Station in Brussels on Wednesday, June 21, 2017. Belgian authorities said they foiled a “terror attack” when soldiers shot a suspect in the heart of Brussels after a small explosion at a busy train station Tuesday on a night that continued a week of attacks in the capitals of Europe. AP

BRUSSELS—Belgian security forces have identified a man who set off an explosion at a Brussels train station before he was shot and killed, Interior Minister Jan Jambon said on Wednesday.

“The terrorist’s identity is known. We have been able to identify him,” Jambon told RTBF radio television without giving further details.

Jambon said the attack could have been much worse because the “big explosion did not happen,” adding more details about the device would be released shortly.

Witnesses said the suspect shouted “Allahu Akbar” (God is Greatest) before setting off the blast, which triggered a small but intense fireball in the station’s underground hall.

Jambon indicated that police had carried out searches given the attacker’s identity was now known.

There were no other casualties apart from the suspect, who was confirmed dead by prosecutors several hours after the attack.

Crying rail passengers fled the station in the heart of Brussels after the explosion, with memories still fresh of last year’s metro and airport suicide attacks in the city that hosts the EU’s headquarters.

“This is considered as a terrorist attack,” federal prosecutor’s office spokesman Eric Van Der Sypt told a news conference outside the station.

The blast in Belgium came a day after a man mowed down Muslims near a mosque in London, and a suspected Islamist on a terror watchlist rammed a car laden with weapons into a police vehicle in Paris.

Brussels has been on high alert since suicide bombers struck its main Zavantem Airport and Maalbeek metro station near the EU headquarters in March 2016, killing 32 people and injuring hundreds more.