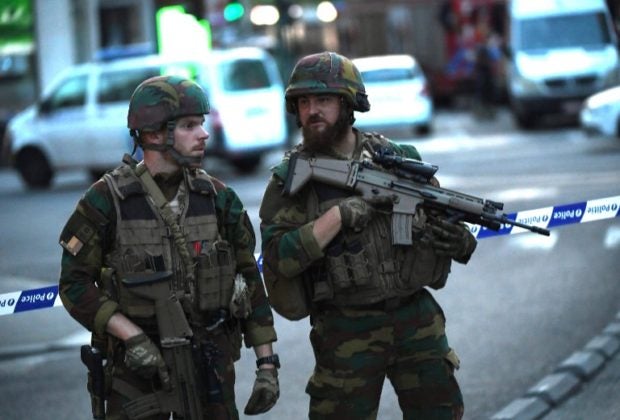 Soldiers speak as they stand alert in a cordoned off area on a street outside Gare Centrale in Brussels on June 20, 2017, after an explosion in the Belgian capital. A suspect shouted ‘Allahu Akbar’ (Islamic term for ‘God is Great’) before causing an explosion at the railway station, a witness said.  AFP

BRUSSELS, Belgium — A suspect shouted out “Allahu Akbar” (God is Great) before causing an explosion at a Brussels railway station on Tuesday, a witness said.

Belgian prosecutors are treating the incident in which soldiers shot a suspect as a terrorist attack, a spokesman said. It is the latest in a string of terrorist attacks in Europe.

“I went down to the mezzanine level, someone was shouting. Then he cried ‘Allahu Akbar’, and he blew up a trolley,” Nicolas Van Herrewegen, a railway sorting agent, told reporters.

“I was behind a wall when it exploded. I went down and alerted my colleagues to evacuate everyone. He (the suspect) was still around but after that we didn’t see him.”

Van Herrewegen added: “It wasn’t exactly a big explosion but the impact was pretty big. People were running away.”

He described the suspect as well-built and tanned with short hair, wearing a white shirt and jeans.

Belgium’s national crisis center later said the suspect had been “neutralized” and the situation was under control.

The man was “still at the scene” but it was not clear if he was dead or alive, federal prosecutor’s office spokesman Eric Van Der Sypt said.

“The suspect has been neutralized by the military that were present at the scene immediately after the explosion. CBB