1st anniversary of 1898 Independence was celebrated in churchyard

Should the government now consider a change of venue in reenacting the first anniversary of Philippine Independence?
By: Tonette Orejas - @ttorejasINQ
Philippine Daily Inquirer / 01:11 AM June 11, 2017 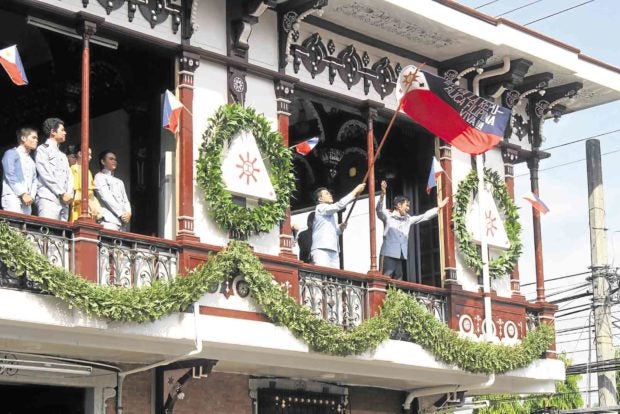 WAVE IT PROUD Unfurling the flag is a highlight of the reenactment of the first anniversary of Philippine Independence at the Pamintuan Mansion in Angeles City. —TONETTE T. OREJAS

ANGELES CITY — For 17 straight years since 1999, the Pamintuan mansion has been the venue of the reenactment of the first anniversary of the country’s declaration of independence from Spain on June 12, 1898.

But a change of venue should now be considered in light of new information gleaned from two articles published 118 years ago in La Independencia (The Independence), the official newspaper of the Philippine Revolution.

According to archivist Francis Musni, the articles showed that the first Philippine Republic actually held its first anniversary celebration at the courtyard of Holy Rosary Parish Church.

The church, which stands west of the Pamintuan mansion and is separated by the Sapang Balen creek, was often referred to as Pisamban Maragul (huge church).

Musni, 40, a consultant for Holy Angel University-Center for Kapampangan Studies (HAU-CKS), found the La Independencia articles in microfilm at the National Library in Manila in 2012.

“It would seem that [the city government and Kuliat Foundation Inc. (KFI)] will have to accept the new information. The best evidence rules apply,” Musni said.

One of the stories, “La Fiesta Nacional (National Holiday),” was published on June 14, 1899,  and was translated from Spanish to English by Kapampangan historian Michael Pangilinan.

Said the story: “On Monday morning (of June 12, 1899), a solemn outdoor Mass was celebrated in the town of Angeles commemorating the anniversary of the proclamation of national independence.

“Attending the solemnity was the honorable President [Gen. Emilio Aguinaldo] and the numerous generals, chiefs and officers of the Army in operations, with a large number of troops that number around 2,000 men. The people completely filled up the entire church courtyard where a tent awning had been suspended. After the Mass, the President took the [makeshift] place of honor and delivered to the crowd an expressive speech in commemoration of this day’s celebration.”

The article also described the marching bands from the Pampanga towns of Porac, Magalang, Sta. Rita and Angeles that greeted Aguinaldo in his residence (the Pamintuan mansion), and played the national march before parading on the main streets of Angeles.

“At 8 p.m., the national flag arrived, with an honor guard of 25 infantry men on duty and the corresponding picket formed by two companies,” said the account of the June 12, 1899, event.

Instead of the ritual unfurling of the flag—one of the highlights of the reenactment at the Pamintuan mansion—the paper reported  that “… the banner of the motherland was warmly cheered by the immense crowd that overflowed the streets and by the marching bands that launched into the air the gallant melodies of our national march.”

Based on the account, the celebration was not confined to the mansion, built by Mariano Pamintuan in the 1890s as a gift to his son, Florentino.

The church and mansion are now part of the heritage zone of Angeles City.

Musni said making the Holy Rosary church a venue for Independence Day celebrations was consistent with the First Republic’s holding of the Malolos Congress at Barasoain Church in Bulacan province.

The archivist also cited the Spanish-Tagalog speech that Aguinaldo delivered on the Republic’s first anniversary, which was published in La Independencia, as another reason for the change of venue.

“As a student of history and advocate of truth, I [feel] it is my obligation to correct history,” Musni said, adding that he was not ascribing the error to KFI nor to the Angeles City government which  based their Pamintuan mansion reenactment on the write-up of KFI historian Daniel Dizon, who had based it on the oral accounts of old Angeles residents.

According to Musni, when Dizon was informed about the two La Independencia articles, Dizon had said, “So that’s what happened.” Dizon died in 2016.

Still at the mansion

Angeles City Mayor Edgardo Pamintuan said freedom rites on June 12 would still be held at the Pamintuan mansion, this being the headquarters of Aguinaldo and Luna.

“I still maintain that the parade passed through the courtyard,” he said. “What’s important is that we remember the past,” he added.

Alvin Alcid, head of the National Historical Commission of the Philippines’ (NHCP) research, publication and heraldry division, said the board had “acknowledged that on the morning of June 12, 1899, an outdoor Mass (was) held at the church’s atrium, followed by a speech delivered by Gen. Emilio Aguinaldo as part of the celebration of the first anniversary of Philippine independence.”

The NHCP would amend its marker at the Pamintuan mansion, he said, adding  it was “a natural course of action after the board acknowledged the significance of the event that happened [in] the church.”

The changes, however, will still be subject to the approval of the NHCP board.

“The possible amendment, however, does not diminish the historical significance of the mansion,” Alcid said.

HAU-CKS executive director Robby Tantingco, who facilitated the meeting among the NHCP, the city government and officials of the Pamintuan mansion-turned-Philippine Social History Museum, said the installation of the new marker should not be “a cause of embarrassment for any party because [it was based on] available data at the time.”

“Historical research is dynamic and based on the latest surfaced information,” Tantingco said.