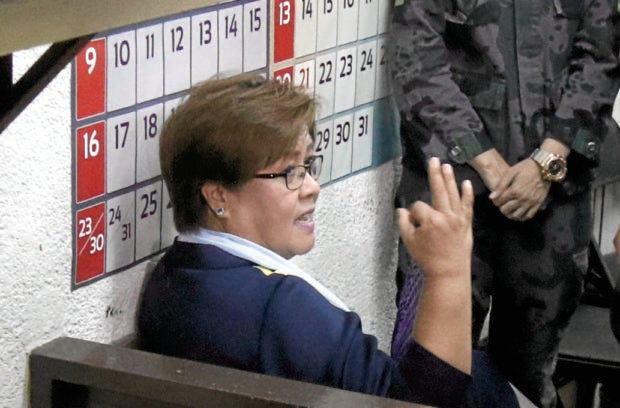 Sen. Leila de Lima on Friday described the latest blunder of Justice Secretary Vitaliano Aguirre as “a calculated step” to hype up the terrorist scare and crush any opposition to martial law in Mindanao.

Aguirre had come under fire for telling reporters on Wednesday that opposition senators Bam Aquino and Antonio Trillanes IV, along with Magdalo partylist Rep. Gary Alejano and former presidential adviser Ronald Llamas,  met in Marawi with members of prominent political clans, the Lucmans and the Alontos, days before the May 23 attacks.

The Justice official’s claim was based on a photograph that turned out to be a 2015 shot taken at the Iloilo City international airport and sourced from a Facebook account.

In a handwritten statement, De Lima said the claim of complicity between the senators and the Maute group based on an outdated photograph “is as stupid as it is outrageous.”

De Lima said the administration’s social media operators were “working overtime to deodorize martial law and to link those who oppose it to the Maute group or IS.”

While he apologized to Aquino and the Lucman and Alonto families on Thursday, Aguirre has also ordered the National Bureau of Investigation  to conduct a probe and case buildup against “some senators and other opposition leaders” for (the) alleged destabilization plot against the government.