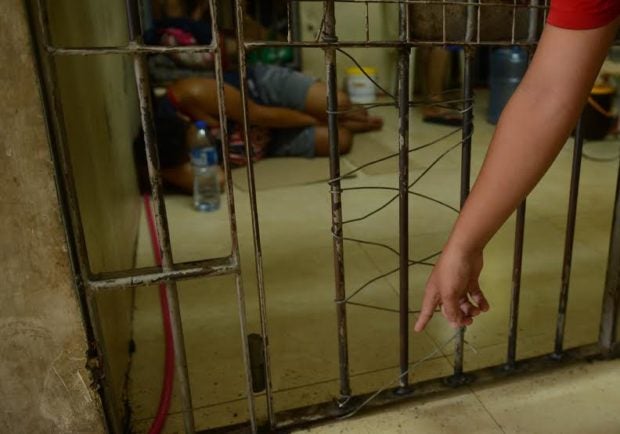 Six detainees, most of them facing drug charges, escaped from the San Pedro police station by cutting the cell’s steel bars. (Photo by Nikon Celis, Contributor)

SAN PEDRO CITY, Laguna — A police chief and jail guards in the cities of San Pedro and Sta. Rosa have been relieved following two separate attacks in police detention cells in Laguna province.

In San Pedro City, the police chief, Supt. Harold Depositar and two other jail guards were relieved on May 24, following the escape of six detainees, among them considered a high-value target for arrest in the illegal drug trade. The detainees, most of them facing charges for illegal drugs, escaped by cutting the cell’s steel bar around 4:30 a.m. on May 23.

Lizarda, who was arrested on May 1, was on the police drug watchlist. The police recovered from him 50 grams of “shabu” (methamphetamine hydrochloride) and P100,000 cash during the buy-bust operation.

In Sta. Rosa City, Chief Supt. Ma.O Aplasca, the CALABARZON police director,  has ordered the relief and filing of administrative charges against the on-duty jail guards, pending an investigation into the death of detainee Restituto Dino Soria, 55.

Soria died around 6 a.m. on May 24, due to septic shock, Gaoiran said, quoting the doctors’ findings. She said Soria was rushed to the hospital when he started vomiting blood which was caused by mauling.

“It appears he was beaten up inside the cell,” Gaoiran said in a phone interview.  SFM