VP Leni calls on public to stay calm, be cooperative 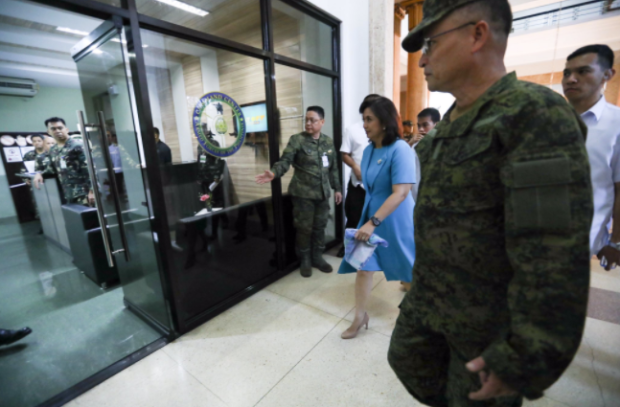 Vice President Leni Robredo arriving at the Armed Forces of the Philippines briefing room in Camp Aguinaldo to get updates on the situation in Mindanao. OVP PHOTO

Vice President Leni Robredo on Wednesday echoed the call of the Armed Forces of the Philippines (AFP) to be cooperative and remain calm in the midst of the ongoing security operations in Marawi City.

“Kanina tinanong ko po sila kung ano matutulong ko sa puntong ito. Sabi po nila, pakiusap sana sa ating mga kababayan na hindi lang maging kalmado pero pakiusap na makipagtulungan (Earlier I asked them what can I do to help at this point in time, hoping for an appeal to our countrymen to stay calm and cooperative will do) ,” she said after she was a given a security briefing at Camp Aguinaldo.

“Isa pong pakiusap ng AFP ang pagiging kalmado natin, bahagi nito yung pagiging responsable. Marami pong impormasyon na lumalabas sa social media na hindi naman totoo at nagko-cause lang siya ng alarm sa lahat. Hindi siya nakakatulong (One of the appeals of the AFP is for us to stay calm because this is part of us being responsible. A lot of information flooding the social media lately, but most of them are untrue and only sow fear and alarm to everybody. It is not helping),” she said.

The vice president said she was given assurance by the AFP that the military is in control of the situation in Marawi.

“Tiniyak po sa atin ng liderato ng AFP na kontrolado nila ang sitwasyon..pero nakikiusap sila sa kooperasyon ng lahat (The leadership of AFP assured that they are in control of the situation… but they are asking for our cooperation),” she said.

Robredo said that now is the time for Filipinos to unite for the country’s peace and security in the country.

Robredo, however, declined to comment on the decision of President Rodrigo Duterte who declared martial law for 60 days in Mindanao.

“Mas mabuti yung maging supportive tayo at this point kung ano yung gagawin ng pamahalaan kasi ito po ang kinakailangan (It is better for us to be supportive at this point in time regarding on what the government will decide to do),” she added. JPV