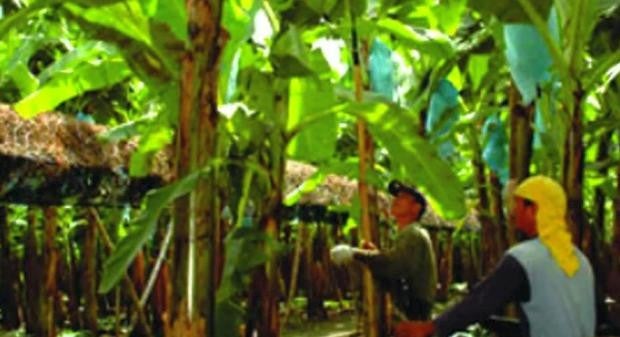 Workers at the Tadeco banana plantation (Photo from the Tadeco website)

The opposition lawmakers in the House of Representatives challenged Speaker Pantaleon Alvarez to view the allegedly anomalous banana land deal between the government and the Tagum Agricultural Development Co. (Tadeco) as an agrarian reform issue instead of a way to get back at his rival Davao Del Norte Rep. Antonio “Tonyboy” Floirendo Jr.

In a press conference Tuesday, Albay Rep. Edcel Lagman said he as chairperson of the House agrarian reform committee in the 8th Congress investigated the same joint venture agreement between Tadeco and the Bureau of Corrections (BuCor) and found out that the banana plantation may be distributed to the farmer beneficiaries under the Comprehensive Agrarian Reform Program (Carp).

Lagman said his committee in 1990 forwarded to the Office of the President and the Department of Justice, which has jurisdiction over BuCor, to put the Davao Penal Colony land under agrarian reform program to qualified beneficiaries without prejudice to Tadeco’s leasehold agreement with the recipients.

Lagman urged Alvarez, who filed the resolution for the probe, to investigate other plantations in penal colonies which may be disadvantageous to the government and thus be better off be distributed among farmers tilling the land.

“We are urging the Speaker and government to (look into) the committee report we prepared way back 27 years ago where we recommended the land covered by the joint venture agreement between Tadeco and the BuCor should be distributed to agrarian reform beneficiaries,” Lagman said.

Akbayan Rep. Tom Villarin also said Alvarez should instead look at the Tadeco deal as an agrarian reform issue more than a political one.

“If this is an agrarian reform issue, not just a political issue, the Speaker should really use his influence to complete the process of agrarian reform. But if he limits it to Tadeco, this will just be construed as political infighting of allies of President Duterte,” Villarin said.

Ifugao Rep. Teddy Baguilat recommended the leadership to also look into the Carp-able lands in state universities and colleges and military reservations.

The “Magnificent Seven” independent minority issued the call while the House started its investigation into the allegedly anomalous joint venture agreement between the government and Tadeco, a banana firm owned by Floirendo.

During the hearing, Anakpawis Rep. Ariel Casilao also urged Justice Secretary Vitaliano Aguirre II to look into parcels of land in the Davao Penal Colony which may not be covered under the joint venture agreement but have been tilled for years by farmers who deserve to be granted the land as agrarian reform beneficiaries.

A day before the House probe began, the House leadership stripped Floirendo of his membership in the powerful Commission on Appointments, in charge of confirming the appointments of government nominees, following his absent vote on the administration death penalty bill.

While Floirendo’s ouster from the CA only meant that Alvarez stayed true to his word to strip of committee positions the lawmakers who voted against or were absent to vote on the bill restoring capital punishment on drug-related offenses, it also capped his offensive against his rival before the start of the House probe.

Floirendo and Alvarez used to be allies but they had a falling-out following a tiff between the two congressmen’s girlfriends.

Alvarez even filed a graft complaint before the Ombudsman against Floirendo for Tadeco’s allegedly disadvantageous contract and his alleged conflict of interest.

The Commission on Audit and a Department of Justice fact-finding committee have reported to Alvarez’ office that the land lease deal between Tadeco and BuCor to use 5,308.36 hectares of land in the Davao Penal Colony for a banana plantation is disadvantageous and unconstitutional.

Alvarez alleged that Floirendo has a personal interest in the contract which was entered into in 2003 when the latter was already a congressman. The Constitution bars members of Congress from entering into contracts with the government.

Read Next
Floirendo accepts ouster from CA, focused on constituents’ welfare
EDITORS' PICK
Metro Manila to remain under COVID Alert Level 2 until December 15
IATF tightens border control, suspends entry of fully vaxxed nationals from ‘green’ countries
Villar Group gears up for AllValue Shopping Party on Dec. 3; around P 1-million promos and discounts up for grabs
Duterte open to making jabs mandatory; Cabinet mulls ‘pressuring’ the unvaccinated
Legarda: Ending Violence Against Women, a cause for all
A delightful blessing!
MOST READ
Quiboloy warns of ‘much worse than Omicron virus’ if his ‘persecution’ is not stopped
Omicron poses ‘very high’ global risk, countries must prepare–WHO
Marcoleta defends pol ads on ABS-CBN
Bongbong Marcos’ conviction in tax case not a crime involving moral turpitude — lawyer
Don't miss out on the latest news and information.