Ombudsman ‘indulges in self-pity’ over some dismissed cases 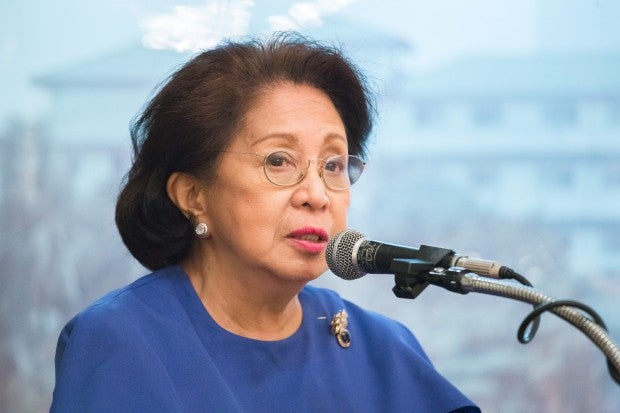 Ombudsman Conchita Carpio Morales expressed frustration at the the dismissal of several corruption cases by the Sandiganbayan due to the inordinate delay doctrine, saying that she felt sorry cases were being dismissed even though it involved millions in squandered taxpayers’ money.

In an interview with CNN Philippines’ “The Source” on Monday, Morales said she sometimes indulged in self-pity if the cases against public officials were dismissed because of the Ombudsman’s alleged inordinate delay in investigating the cases before filing these to the anti-graft court.

“Of course I’m frustrated. It’s natural I’m frustrated. We feel very strongly about the merits of the case. They involve millions, even billions. But the case is nipped in the bud when the trial court judges dismiss the cases because of inordinate delay,” Morales said.

“Sometimes I indulge in self-pity. Why do they look at the Office of the Ombudsman for inordinate delay?” she added.

Morales even took a swipe at the Sandiganbayan, adding that the the anti-graft court should look at its disposition rate first before it makes a comment about inordinate delay.

“They’re only looking at the Ombudsman, why don’t they look at the Sandiganbayan, the Regional Trial Court, the Supreme Court? Mirror themselves,” Morales said.

Morales expressed hope the Ombudsman’s motion before the Supreme Court to provide guidelines in the application of the inordinate delay doctrine would modify the definition to shorten the period of alleged delay.

The Sandiganbayan has dismissed cases which took the Ombudsman years to file before the antigraft court, for violation of the accused’s constitutional right to speedy disposition of case. The inordinate delay doctrine is a jurisprudence set by the Supreme Court.

But Morales said the period of investigation should only cover the preliminary stage, where the respondents are already asked to file their counter-affidavits to the charges imputed against them.

She noted that the fact-finding should not be included in the computation because there are cases the accused are not even made aware that the Ombudsman is conducting a fact-finding investigation already.

“The Justices of the Supreme Court which issued the inordinate delay doctrine should come up with guidelines or standards to enlighten once and for all trial judges to know when to start counting and what it’s all about,” Morales said.

Asked about a particular case she feels sorry about, Morales cited the dismissal by the Sandiganbayan of a graft case against former Bataan Gov. Leonardo Roman over the anomalous 2004 construction of a P3.66-million mini theater, due to the Ombudsman’s unreasonable delays.

The Supreme Court took cognizance of the case when the complainant Enrique Garcia Jr. in 2011 appealed the Ombudsman’s dismissal due to lack of probable cause of Roman’s case.

The Supreme Court thus ordered the indictment of Roman, which resulted in the Ombudsman’s filing of the case before the Sandiganbayan in 2015.

But the Sandiganbayan Special Second Division in 2016 dismissed the case due to unreasonable delays that supposedly stretched 11 years, five years of which the Ombudsman took to conclude the preliminary investigation.

“Garcia won the case in the Supreme Court. The Supreme Court took four years… The Supreme Court said you file information for violation of the Anti-Graft and Corrupt Practices Act… What did Roman say? This case has been pending for so many years, therefore it should be quashed,” Morales said.

“The Supreme Court directed the Ombudsman for filing of the case, (but) the Sandiganbayan dismissed the case because of inordinate delay, part of which is attributable to the Supreme Court. So I feel sorry for the case,” she said.

This case load has been reduced to 6,200 already, Morales said, for a case disposal rate of around 42 to 44 cases a day.

This disposal rate is “unprecedented,” Morales said. “I work on Saturdays,” she pointed out.

Morales said the right of the accused to have a speedy disposition of the cases against them should be balanced with the right of the state to prosecute officials accused of squandering taxpayers’ money.

“If a case is dismissed due to inordinate delay, the prosecution, the state is deprived of its right to prosecute. There should be a balance of rights,” Morales said.

Graft raps vs Parojinogs junked due to inordinate delay