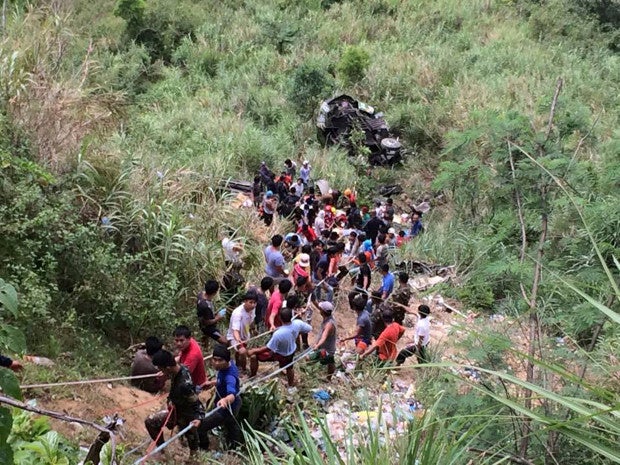 Senator Manny Pacquiao is seeking a Senate inquiry into the Nueva Ecija bus crash that left more than 30 people dead.

In Senate Resolution No. 346 he has filed, Pacquiao also wants the Senate committees on public services and on public works to look into the road safety policies and regulations being implemented by concerned agencies.

The Senate probe, he said, was aimed at improving road safety standards and protecting the lives of millions of passengers and pedestrians.

“It is the duty of the State to enact laws and policies that will ensure a safe, viable, and dependable road safety system in the country in order to protect the welfare of the general public,” Pacquiao said in the resolution

The senator noted that road accidents “are very common in the Philippines due to poor road signs and infrastructure.”

“We have witnessed these past few months a surge in the number of road accidents, the recent of which involved a bus in Nueva Ecija that claimed the lives of more than 30 people,” he said.

Pacquiao said there was an urgent need to implement strictly the posting of appropriate road safety devices and road signs, citing studies that indicate that “many of the traffic signs in the country still do not conform to internationally accepted standards on color, size and shape.”

“There is an urgent need to implement an aggressive and proactive road safety signs and infrastructures, especially to roads that are considered risky due to topography and location,” the senator added.

Last month, the committee on public services headed by Senator Grace Poe conducted a probe into another bus accident in Tanay, Rizal, that claimed the lives of 15 people last February 20. CBB/rga