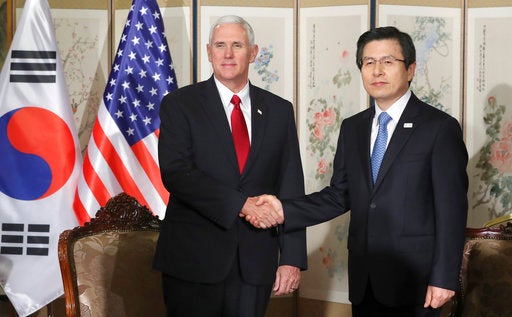 SYDNEY — As tensions rose on the Korean peninsula, U.S. Vice President Mike Pence, who has President Donald Trump’s trust but little diplomatic experience to go with it, became the top American official headed to the region after North Korea again failed to successfully launch a ballistic missile.

Days later, the mild-mannered former governor stood along the Demilitarized Zone separating North and South Korea and stared back at soldiers from the North. In Australia, Pence’s mission was to soothe any lingering hurt stemming from a tense telephone conversation Trump had with the prime minister in January.

A 10-day swing through four Pacific Rim nations is offering evidence that Pence has become one of Trump’s chief emissaries on the world stage, patching up relations, reassuring allies still wondering about Trump’s unpredictable ways and diving into international crises like North Korea.

Pence’s trip was planned weeks ago. But it dropped him in South Korea just in time to deliver North Korea a stern warning from the U.S.: that “all options are on the table” when it comes to curbing the North’s nuclear ambitions, and that the Trump administration will seek support from its allies to pressure Pyongyang to give up its nuclear weapons and ballistic missile programs.

His foray into the DMZ and his meetings with South Korean and Japanese leaders allowed Pence to shape a key American foreign policy issue, presenting a new challenge for a politician whose prior foreign policy experience was limited to trips to the Middle East as a congressman and trade missions to Japan, China, Israel and Europe as Indiana’s governor.

Pence’s early foreign travel schedule contrasts sharply with a mostly homebound Trump, who is not scheduled to travel overseas until late May for NATO meetings in Belgium and a gathering of the Group of Seven major industrial nations in Italy. Pence partly covered that ground when he visited Germany and Belgium in February.

Trump’s predecessor, Barack Obama, had visited nine countries by late April 2009, his first three months in office, checking in with allies such as Canada, Britain and Germany. The last first-term president to wait until May to take his first foreign trip was Jimmy Carter in 1977.

In some ways, Pence is the advance team: His earlier trip to Europe and his Asia trip that ends Tuesday are partly laying the foundation for journeys being planned for Trump. In other ways, Pence is the face of reassurance, offering in-person outreach to world leaders Trump has clashed with or who have doubted Trump’s commitment to them at the start of his presidency.

Pence’s extensive Asia-Pacific tour produced a collection of images depicting a Pence-as-president parallel universe, from friendly consultations with leaders from across Asia, to donning a brown bomber jacket to watch North Korean soldiers along the DMZ to a speech to 2,500 cheering sailors aboard the USS Ronald Reagan in Tokyo Bay.

But it also raised questions of whether allies view Pence as speaking for Trump or whether his reassurances could easily be dismissed by one of the president’s tweets.

In meetings with his counterparts, Pence frequently passed along “greetings” from Trump and told his hosts how much America valued their alliance, language that’s commonplace in diplomacy but understated compared to the more free-wheeling Trump.

On Thursday, for example, Pence told Indonesian President Joko “Jokowi” Widodo how “proud” he and Trump were to partner with him and spoke of their hopes of working together.

Hours later and several time zones away, Trump laced into Canada, saying what America’s northern neighbor had done to U.S. dairy farm workers was “a disgrace.” Trump was lashing out at Canada’s decision to change its policy on pricing domestic milk to cover more dairy ingredients, leading to lower prices for Canadian products, including ultra-filtered milk, that compete with U.S. products.

Pence’s advisers say the differences with Trump amount to style over substance. A senior administration official, who spoke on condition of anonymity to describe the relationship, said Trump and Pence “are constantly talking about what message they want to be conveyed. While their styles may be a little bit different in how they do that, the message is the same.”

Pence’s speeches, meanwhile, were peppered with phrases in the language of his host countries, aimed at making a personal connection. In Japan, he spoke of his fondness for the Japanese word “kizuna,” meaning bonds or connections, which he said helped define the close relationship and mutual respect between the two countries. He recalled his two trips to the country as governor, as well as his home state’s ties to Toyota and Honda, the Japanese auto giants.

In South Korea, he noted that his late father had served there during the Korean War and had received a Bronze Star nearly 64 years to the day of his trip.

Faith and family also played a role. On the aircraft carrier in Japan, Pence said the sailors were owed a debt of gratitude from Trump and the American people and quoted from the Book of Romans, “If you owe debts, pay debts, if honor, then honor, if respect, then respect.”

In Indonesia, he called the country’s moderate form of Islam an “inspiration to the world,” comments that affirmed Widodo. A day earlier, Widodo suffered a political setback when a political ally was defeated by Islamic conservatives. Pence and his family later toured the Istiqlal Mosque, the largest in Southeast Asia.

Family talk also helped Pence smooth over relations with Australian Prime Minister Malcolm Turnbull, who had a tense telephone exchange with Trump in January over a refugee resettlement deal struck under the Obama administration.

The Turnbulls welcomed Pence, his wife and their two daughters for morning tea in Sydney, which allowed wife Karen to hold the prime minister’s 8-month-old granddaughter, Alice. “My wife is extremely impressed with your grandchildren — we don’t have any yet,” Pence told Turnbull.

Turnbull said Karen Pence cared for the baby so well that his daughter said she should “take over babysitting.”

“We just are so grateful,” Pence told Turnbull. “The warmth of the welcome of our little family reflects the warmth and the feelings between the people of the United States and the people of Australia.”/rga