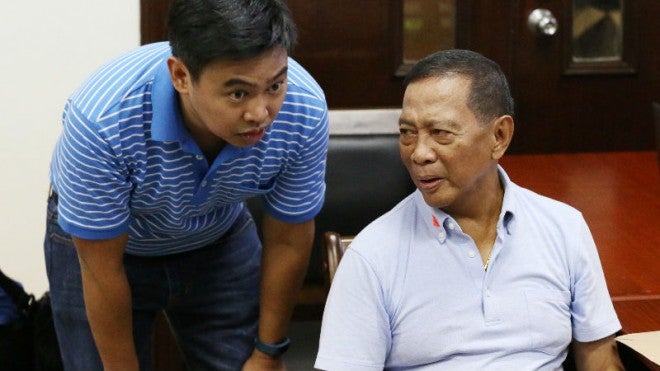 State prosecutors opposed the request of former vice president Jejomar Binay Sr. and his son Jejomar Erwin “Junjun” Binay Jr. to go on a pilgrimage in Israel this May, saying that they are a flight risk because of the family’s pending graft cases.

In its comment opposition, the Office of the Special Prosecutor under the Ombudsman said the two Binays’ request for leave to travel abroad for a spiritual journey in Israel from May 15 to 29 should be denied.

The prosecution said the Binay father and son are going on a pilgrimage with the rest of the family, including the matriarch Dr. Elenita Binay, who also faces graft and malversation cases before two divisions in the Sandiganbayan.

This means the three Binays would be abroad despite pending cases in the country, making them flight risks, the prosecution said.

“They ought to be considered as a flight risk. Not only are they travelling with immediate family members who happen to be in a similar situation as they are; both accused also failed to show other personal and professional reasons that will compel them to return to the country,” the prosecution said.

The prosecution said the Binays’ right to travel must be restricted especially since the offended party is the country and its citizens, and because of the sheer amount of squandered public funds amounting to P2.289 billion involved in the allegedly anomalous Makati car park building construction.

“This is particularly true and must thus be reinforced against both accused, particularly since they face criminal charges that involve moral turpitude and considerable loss of public funds in the total amount of P2,288,650,719,” the prosecution said.

The Binay father and son both face malversation, graft and falsification charges over the alleged overpricing of the Makati car park building.

The two filed similar travel motions before the Sandiganbayan Third Division seeking the court’s nod to attend a “spiritually charged pilgrimage” in Israel from May 15 to May 29. The court earlier issued a hold departure order against them.

The said pilgrimage would be led by Father Francis Gustilo, the Pilgrimage Chaplain and former Father Provincial of the Salesian Fathers in the Philippines.

Father Gustilo is also the spiritual facilitator of the Binays’ regular Tuesday Bible meetings at Don Bosco Center in Makati.

They sought to be joined by their other relatives “in the faith-filled journey to the Holy Land.”

In his travel motion, Binay Sr. said he is almost 75 years old and a family man who “believes this pilgrimage to the Holy Land is an exceptional case for a devout Catholic.”

“Movant respectfully submits also, that the permission to travel from this Honorable Court is likewise in line with the state policy, where the state gives importance to the sanctity of family life and shall protect the same,” Binay Sr. said through his lawyers.

The accused also maintained that the Binay family’s pilgrimage would “not affect the progress of the instant cases,” which are subject to motions for re-raffle.

The court earlier dismissed Binay Sr.’s motion for a re-raffle of the case. The said resolution is under appeal.

The Binays also said they have no intention to flee their charges. IDL