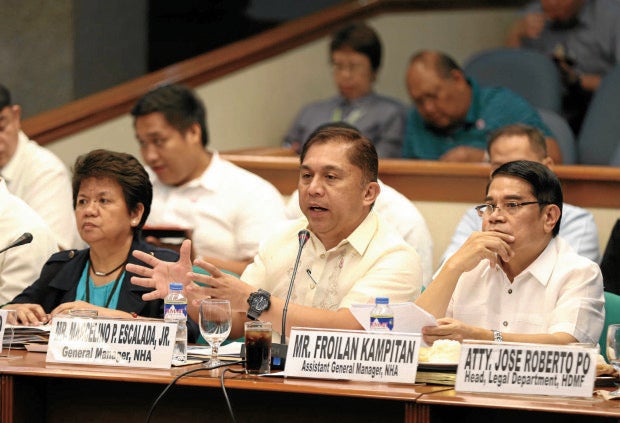 Congress will come out with a joint resolution allowing the National Housing Authority (NHA) to “reaward” more than 50,000 unoccupied housing units intended for military and police personnel to four sectors, that included informal settlers like members of the urban poor group Kadamay (Kalipunan ng Damayang Mahihirap).

At a congressional hearing on Tuesday, NHA General Manager Marcelino Escalada Jr. said he would not want to live in the government housing units after seeing these for himself.

The housing program for the military and police has not attracted the beneficiaries because they found the homes too small—a floor area of 22 square meters (sqm) on a 36-sqm lot (which cost P175,000) and a floor area of 18-27 sqm on a 40-sqm lot (P208,000), according to NHA officials.

Sen. JV Ejercito, chair of the Senate committee on urban planning, housing and resettlement, noted that the international standard for housing was 7 sqm per person.

“That 22-sqm house is only good for three persons,” he said.

Military and police representatives at the hearing said the NHA had not consulted them on the design and planning of the houses and were only told of the affordable housing program for them.

Administrative Order No. 9, issued in 2011, directed the NHA to build permanent housing sites for low-salaried members of the military and police and in this case, the three lowest ranks.

Escalada said of the 66,184 houses built by the NHA for soldiers and policemen all over the country, only 8,240 houses had been occupied.

Escalada admitted that the government housing for the military and police was a “failure” given the low occupancy.

He said the NHA was proposing the building of bigger houses, doubling the size of the lots from 40 sqm to 80 sqm.

The NHA head then urged Congress to grant him the “legislative authority” to reaward the housing units.

Negros Occidental Rep. Alfredo Benitez said at the hearing he had filed House joint Resolution No. 11 “authorizing the NHA to award the unoccupied and unawarded housing units to other qualified functionaries.”

Ejercito said at least 5,000 of the houses that were occupied by Kadamay on March 8 in Pandi town and San Jose del Monte City in Bulacan would be given to members of the group as earlier announced by President Duterte.

Ejercito said it would be up to the NHA to distribute the houses.

“It’s still a win-win solution since Kadamay opened up the eyes of everyone to the gravity of the problem of the housing sector,” Ejercito told reporters after he led a hearing on Kadamay’s occupation of the units intended for members of the Armed Forces of the Philippines and the Philippine National Police.

“My only concern here is that I hope this would not be a bad precedent,” he said.

The hearing was called days after Mr. Duterte announced he would give for free the housing units in Bulacan to Kadamay members, whose only sin, he said, was being poor.

The President promised to build better houses for members of the police and the military by December.