Asean hopes up on code of conduct 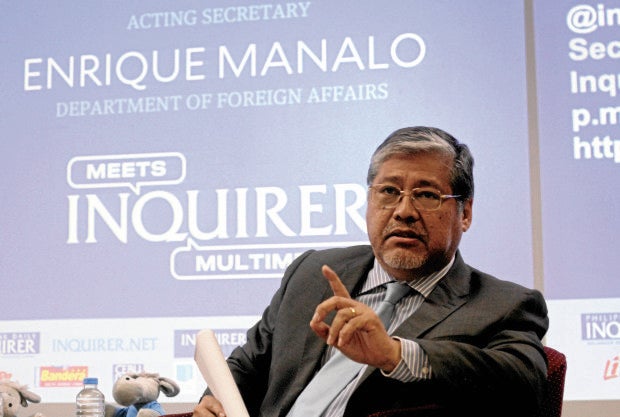 China’s positive view of a code of conduct for claimants in the South China Sea will work toward successful negotiations with the Association of Southeast Asian Nations (Asean) on maintaining order in the disputed waterway, Acting Foreign Secretary Enrique Manalo said on Tuesday.

Speaking at the Meet Inquirer Multimedia forum, Manalo said a framework for the code of conduct could be finished by June.

According to Manalo, there have been two meetings between China and the Asean at the expert level and these have achieved “concrete and positive results.”

“We’re moving forward in the right direction and we’re making good progress toward coming up with a framework,” he said, adding that the framework would serve as a guide for key issues and elements that should be included in the actual code of conduct.

China claims nearly all of the South China Sea, but a ruling by an international arbitration tribunal last year in a challenge brought by the Philippines invalidated that claim.

Brunei, Malaysia, the Philippines, Vietnam and Taiwan also have claims in the South China Sea, where $5 trillion in ship-borne trade passes every year.

The proposed code of conduct is expected to be discussed by China and its rivals for territory in the South China Sea during the 50th Asean summit this year, which is hosted by the Philippines.

“We’ve been talking about a code in the last 15 years, nothing has happened. In 2002 nothing really happened substantively except speeches. But now we’re on the road to really looking into it seriously … and we are now in a position, hopefully, to embark on actual serious negotiations on a code,” Manalo said.

He said improving relations between China and the Philippines spurred efforts toward the conclusion of a code of conduct.

“I think bilaterally the President’s visit last October to China opened the doors that we were able to restore political and economic relations to their previous state. There’s a general increasing trust among the countries and it was in fact China who really made a big move forward to begin discussions,” Manalo said.

“Asean has always been ready to discuss (the code of conduct) and finally China has come forward with a very positive attitude,” he added.

He explained that a declaration of conduct signed by Asean and China in 2002 simply established principles.

“Ultimately the code (of conduct) will be the big document,” Manalo said.

Read Next
NHA to ‘reaward’ houses to Kadamay members
EDITORS' PICK
Welcome the next imagery master with vivo X70 co-engineered with Zeiss
An innovative, fun shopping experience AllDay
Declaration of Pacquiao as PDP-Laban presidential bet illegal — Cusi wing
Watch live performances by ITZY, Mamamoo and other K-pop stars on Smart’s GigaPlay App
97 areas in PH under Alert Level 4 — DOH
COVID-19 cases may peak by October — DOH
MOST READ
Son of prominent businessman nabbed in La Union for cocaine possession
Roque not surprised by opposition to ILC nomination: They do not wish anyone to succeed
Drilon wants income tax records of Pharmally execs with luxury cars
Declaration of Pacquiao as PDP-Laban presidential bet illegal — Cusi wing
Don't miss out on the latest news and information.