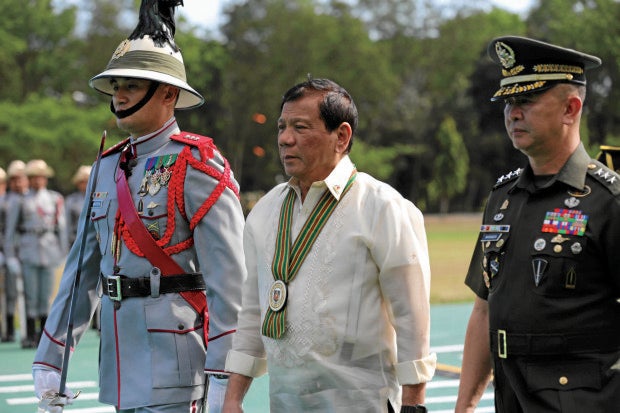 President Rodrigo Duterte has maintained his “very good” satisfaction rating in the first quarter of 2017, according to the latest survey by Social Weather Stations (SWS).

The survey, conducted from March 25 to 28 and first published in the BusinessWorld, showed that Duterte received a +63 net public satisfaction rating, similar to the score he recorded in December last year.

SWS said Duterte’s overall score was buoyed by the “excellent” +87 rating he received from his bailiwick Mindanao. The President, however, suffered a significant decline of nine points in Balance Luzon from +60 in December 2016 to +51 this March.

Duterte logged a “very good” +62 in the Visayas and +64 in Metro Manila. He also maintained “very good” satisfaction ratings across all socioeconomic classes—a +56 from +52 among class ABC respondents, +64 among class D or the masa, and +60 from +61 in class E.

The survey, conducted through face-to-face interviews among 1,200 adults, had error margins of ±3 points for national percentages, and ±6% each for Balance Luzon, Metro Manila, the Visayas and Mindanao.

A recent survey by Pulse Asia showed that President Duterte continued to enjoy high trust and performance ratings in March, though both figures declined slightly from his previous scores in December. CBB/rga 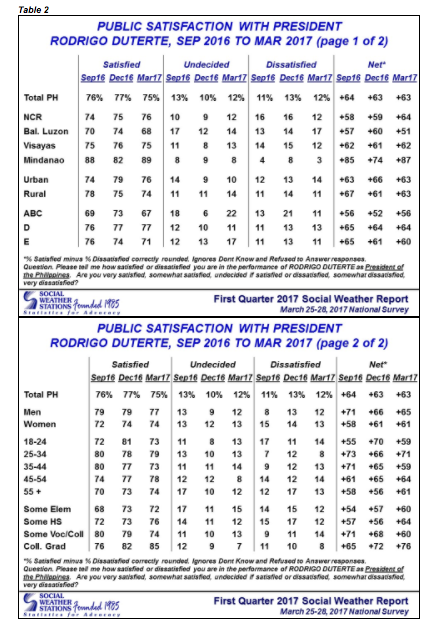