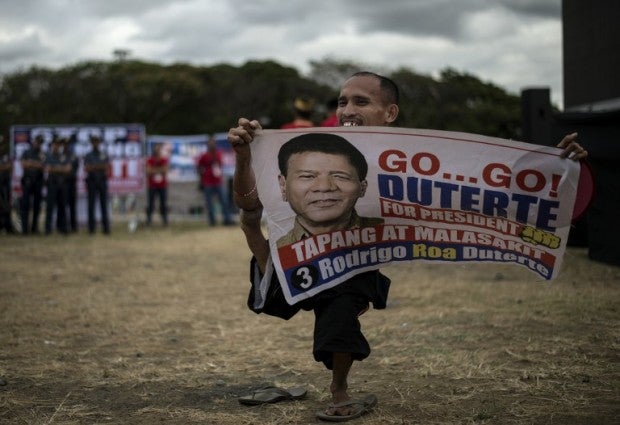 Arkade Saavedra, a supporter of President Rodrigo Duterte, participates in a protest calling for the ouster of Vice President Leni Robredo over his drug war criticism, in Manila on April 2, 2017. Thousands of Duterte supporters held a protest in Manila on April 2, calling for the removal of Vice President Leni Robredo for criticizing Duterte’s deadly war on drugs before the United Nations. AFP

Results of an independent poll released Wednesday showed a drop in the number of Filipinos who trust President Rodrigo Duterte, although he was still considered trustworthy by three-quarters of the respondents despite an impeachment complaint pending against him.

Results released by Pulse Asia Research Inc. showed that 76 percent of the 1,200 respondents expressed trust in Duterte, down 7 percentage points from December. Some 78 percent of respondents approved of his performance, down from 83 percent.

The nationwide survey was conducted March 15-20 — around the time a lawmaker filed an impeachment complaint against Duterte because of alleged corruption and the thousands of deaths in the president’s anti-drug crackdown.

Rep. Gary Alejano’s complaint alleges that Duterte violated the constitution, committed bribery and corruption, and betrayed the public trust with his actions, including the crackdown, which has sparked extrajudicial killings. It also alleges that Duterte failed to declare huge bank deposits as required by law.

The impeachment bid faces an uphill battle, with the president’s allies holding an overwhelming majority in the House of Representatives.

The survey has a margin of error of plus or minus 3 percentage points, according to the pollster. CBB