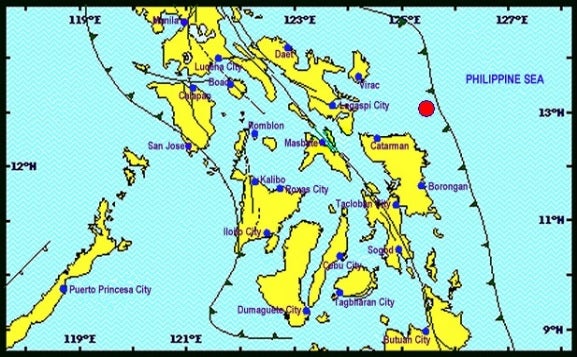 A map released by the Philippine Institute of Volcanology and Seismology shows the epicenter of a 5.4 magnitude undersea earthquake that struck off Catarman, Northern Samar. PHIVOLCS IMAGE

A 5.4 magnitude earthquake hit an area of the Philippine Sea off Catarman, Northern Samar, on Monday morning, the Philippine Institute of Volcanology and Seismology (Phivolcs) reported.

The undersea quake struck two days after two “moderate” temblors measuring magnitude 5.6 and 6 rocked Mabini, Batangas. However, Phivolcs said the Samar quake was not related to the Batangas shakers.

Monday’s tectonic earthquake was recorded at 8:43 a.m. and its epicenter was located 109 kilometers northeast off Catarman at a depth of 26 kilometers, a Phivolcs bulletin said.

It was felt at Intensity II in Catarman, Cabid-an, Northern Samar; and Juban, Sorsogon.

Karl Vincent Soriano, Phivolcs science research analyst, said it was caused by a movement of the Philippine Trench. Meanwhile, the Batangas temblors were due to a local fault.

The Phivolcs bulletin said no damage or aftershocks were expected from the Samar quake. CBB/rga