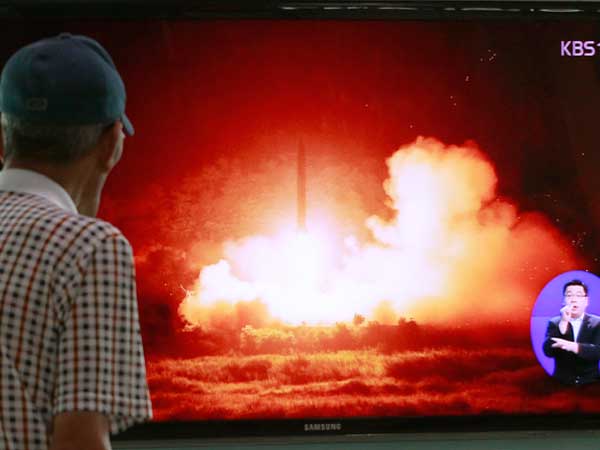 A man watches a TV news program showing a file picture of a missile launch conducted by North Korea, at Seoul Railway Station in Seoul, South Korea, Sunday, July 13, 2014. North Korean state media said Saturday that the US missile strike on Syria ‘proves a million times over’ that strengthening its nuclear program was the right choice. AP FILE PHOTO

SEOUL, South Korea — North Korea has said the US missile strikes on Syria were an “intolerable act of aggression” that “proves a million times over” that strengthening its nuclear program was the right choice, state media reported Saturday.

The comments were Pyongyang’s first since US President Donald Trump ordered the strikes on an air base in the war-wracked country Thursday in retaliation for an apparent chemical attack.

“The US missile attack against Syria is a clear and intolerable act of aggression against a sovereign state and we strongly condemn it,” KCNA news agency quoted an unnamed spokesman for the North Korean foreign ministry as saying.

“The reality of today shows that we must stand against power with power and it proves a million times over that our decision to strengthen our nuclear deterrence has been the right choice.”

READ: US rains cruise missiles on Syrian air base

Analysts had earlier said the strikes contained a clear message for Pyongyang that the US was not afraid to exercise the military option, and there had been speculation as to how the North would respond.

However, Pyongyang’s response suggested the reclusive state was determined to continue with its nuclear weapons program.

“Swaggering as a superpower, the US has been picking only on countries without nuclear weapons and the Trump administration is no exception,” the foreign ministry spokesman said, according to KCNA.

“The Syria attack thoroughly reminds us the fact that it is absolutely dangerous to have any illusions about imperialism and only military power of our own will protect us from imperialistic aggression,” he added.

“We will keep bolstering our self-defensive military might in various ways in order to cope with the ever-intensifying US acts of aggression.”

The North has carried out five nuclear tests — two of them last year — and expert satellite imagery analysis suggests it could well be preparing for a sixth.

Pyongyang has shown no sign of reining in a missile testing program ultimately aimed at securing the capability to deliver a nuclear warhead to the continental United States. CBB/rga