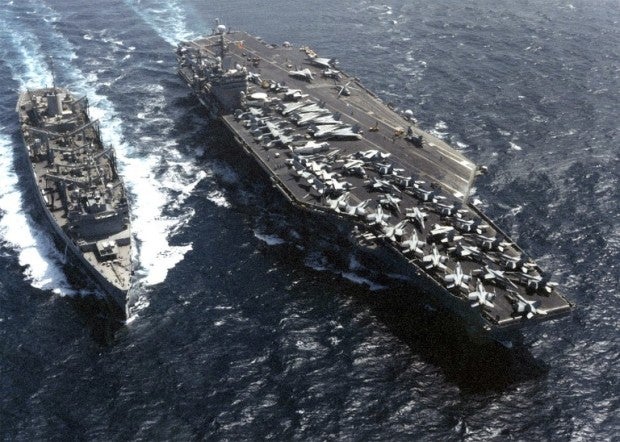 In this photo released 13 October 2001 by the US Navy, the aircraft carrier USS Carl Vinson (right) and the fast combat support ship USS Sacramento steam side-by-side during a routine replenishment at sea. The Carl Vinson is leading a naval strike group moving toward the Korean Peninsula on Saturday as the United States boosts its defenses against North Korea’s nuclear ambitions. AFP

WASHINGTON — A US Navy carrier strike group was moving toward the Korean Peninsula on Saturday as the United States boosts its defenses against North Korea’s nuclear ambitions.

“US Pacific Command ordered the Carl Vinson Strike Group north as a prudent measure to maintain readiness and presence in the Western Pacific,” said Commander Dave Benham, spokesman at US Pacific Command.

“The number one threat in the region continues to be North Korea, due to its reckless, irresponsible and destabilizing program of missile tests and pursuit of a nuclear weapons capability,” he told AFP.

Originally scheduled to make port calls in Australia, it headed instead from Singapore to the Western Pacific Ocean.

The North has carried out five nuclear tests — two of them last year — and expert satellite imagery analysis suggests it could well be preparing for a sixth.

US intelligence officials say Pyongyang could be less than two years away from developing a nuclear warhead that could reach the continental United States.

On Thursday and Friday, US President Donald Trump hosted his Chinese counterpart Xi Jinping for talks during which he pressed Pyongyang’s key ally to help curb the North’s nuclear weapons program.

Trump has threatened unilateral action against the hermit state, a threat that appears more palpable after he ordered a strike on a Syrian airfield following an apparent chemical attack.

The head of North American Aerospace Defense Command (NORAD), which provides missile detection and defense for the region, said Thursday she was “extremely confident” of US capability to intercept a potential intercontinental ballistic missile (ICBM) bound for America from the North.

But General Lori Robinson expressed concerns for the type of ballistic missile powered by a solid-fuel engine that Pyongyang said it successfully tested in February.

Read Next
US strikes on Syria justify nukes — North Korea state media
EDITORS' PICK
Diokno to Duterte: OK to make fun of buck tooth, but focus on people’s needs first
Nograles: Cabinet members to donate 75% of monthly salary to aid COVID-19 fight
Robredo spox thanks Duterte for defending VP’s efforts vs COVID-19
Quick chat with Nicole Andersson: ‘You really don’t need much to be happy’
10 Filipinos positive for COVID-19 in UK, 7 in Ireland — envoy
IATF to LGUs: Issue ordinances vs attacks on frontliners, COVID-19 patients
MOST READ
Sotto on Isko Moreno’s call: We do our job without the media following our every move
ADB warns PH against prolonged lockdown
Cook more and eat less: Tips on your quarantine diet
Cayetano: Almost 200 solons to donate 1 month salary to raise P50M for COVID-19 fight
Don't miss out on the latest news and information.