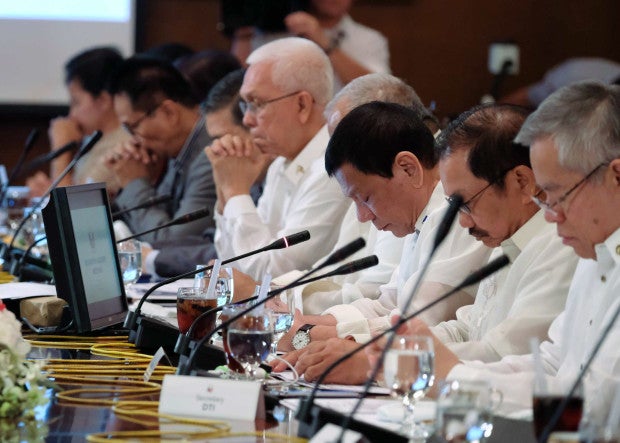 After President Rodrigo Duterte went on a “firing spree,” Malacañang said Saturday the chief executive was still “satisfied” with his Cabinet members.

“The President is satisfied with the overall performance of his Cabinet unless he says otherwise,” presidential spokesperson Ernesto Abella said in a statement.

Abella said Duterte “would have a deeper bench to choose from with the lapse of the appointment ban on losing candidates.”

“This, however, does not mean that he will be filling up Cabinet positions with new men and women.  As the President himself said, his Cabinet line-up is filled, except for those positions whose heads are designated as officers-in-charge,” he said.

The President has fired even his longtime allies over corruption allegations. He said he would dismiss officials even with just a “whiff” of corruption.

Duterte earlier fired his campaign spokesman and longtime ally Peter Tiu Laviña as head of the National Irrigation Administration after allegations that he tried to extort money from contractors in his agency.

During a Cabinet meeting on April 3, the President sacked former Interior secretary Ismael “Mike” Sueno over corruption allegations in the Rosenbauer fire truck deal entered into by the Department of Interior and Local Government (DILG).

READ: Duterte stands by move to fire Sueno: I know what I’m doing

A corrupt-free government was one of the campaign promises of Duterte along with stopping illegal drugs and criminality in the Philippines. IDL