How to save a life while under fire in Afghanistan 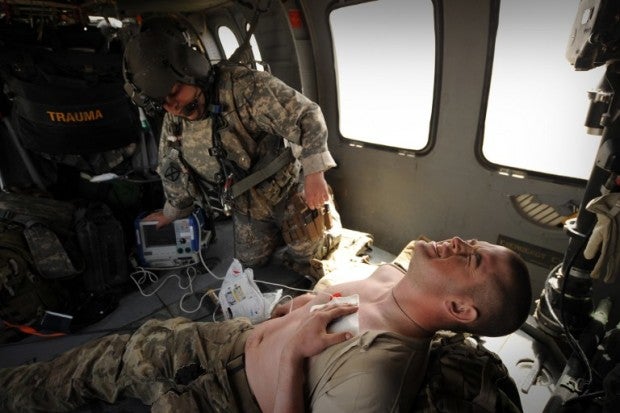 This file photo taken on March 25, 2011 shows a US army flight medic Sergeant Bobby Dorris from Company C, 1st Battalion, 52nd Aviation Regiment, MEDEVAC team treating a US Army soldier (bottom) for an unspecified complaint on their Blackhawk helicopter in southern Afghanistan. It was first used by the armies of the Roman Empire. Centuries later, the tourniquet is buying casualties in Afghanistan what they need most — time — as surgeons adapt battlefield medical procedures to the grinding conflict. AFP

It was first used by the armies of the Roman Empire. Centuries later, the tourniquet is buying casualties in Afghanistan what they need most — time — as surgeons adapt their battlefield procedures to the grinding conflict.

Since the US invasion of 2001, the pattern of injuries sustained in Afghanistan has changed when compared to previous conflicts, such as Vietnam.

In response, Western armies working with their Afghan counterparts have dramatically improved their emergency protocols — and, in the case of tourniquets and blood transfusions, revolutionized them.

These changes “have resulted from a combination of predominantly blast injuries and the use of body armor, leading to special focus on head and extremity injuries”, says Colonel Robert Suter, an American surgeon based in Qatar.

Suter says the tourniquet — long a controversial tool because, if badly applied, it can damage nerves or tissues on a wounded limb — in particular has had an enormous impact in Afghanistan.

The peculiarities of war there have led to pioneering new forms of the ancient device: the first recorded combat use of a junctional tourniquet, which can be used on a pelvis or an armpit, was in Afghanistan in 2014.

Blood transfusion protocols have also “completely changed as the result of our experience, with whole blood and early platelet use now the standard”, Suter says.

Other tools such as advanced trauma dressings, blood containers and concussion screenings are being brought to the frontline — most of them accessible to the NATO-trained Afghan army.

“The biggest lesson learned from Afghanistan is that it is the simple things done promptly that save the most lives,” says Suter.

“Things like stopping bleeding, keeping the airway open, giving blood. When we do these things we buy the time needed to do the more complex things later with excellent survival rates.”

“Time is gold, it will make the difference between life and death,” agrees Dr. Gianluca Polce, an orthopedic surgeon at TAAC-WEST.

In addition to the Golden Hour, the armed forces operating under NATO’s banner apply the “10.1.2” doctrine — three emergency phases which, cumulatively, must not exceed two hours.

Vital intervention must be received within the first ten minutes, known as the Platinum Ten; emergency first aid within an hour, and the first surgery must be carried out by the two-hour mark.

Care is then divided into four stages, from initial management to evacuation to the country of origin.

It all works well in theory. But in practice it can be another story, admits Dr. Polce: “Ten minutes is a tricky time when you are under attack.”

The goal is to instill a sense of urgency. “It was very important for each soldier to understand how to save a life,” Buffet explains.

Like Suter, she says the tourniquet plays a key role.

During Buffet’s first tour of Afghanistan from 2005-2007, the device was completely absent among Afghan forces — as opposed to American troops, who rely on it so heavily they often wear one attached to their pant legs.

“The Afghan soldiers now all have their tourniquets and their AFAK (Afghan first aid kit),” she says.

“Now they can survive… This is the main advantage of the military (compared) to the civilians: they all have tourniquet.”

At Kabul’s Emergency Hospital, which receives wounded civilians and soldiers as well as insurgents, doctor Abdushukoor Sardar has just received a man who was wounded 12 days ago.

“The man came from the north, he had received a bullet in the thorax. I had to remove the left lung,” he says.

The lack of infrastructure in some parts of rural Afghanistan means civilians sometimes arrive too late for effective medical aid to be administered, he says.

“Once they are here, they are treated within 10 to 15 minutes… but some arrive 20 hours, one week after the injury.”

Spiraling casualty figures have underscored the need to narrow that time gap for civilians and soldiers alike.

When NATO combat forces withdrew at the end of 2014, more than 3,500 foreign soldiers had been killed and about 33,000 wounded (including 20,000 Americans), according to the Pentagon.

But it is Afghan civilians who continue to pay the highest price.

More than 20,000 Afghan non-combatants are estimated to have died in the conflict since 2005, and the situation has grown more grim with each passing year: civilian casualties approached 11,500 in 2016, the highest recorded by the UN since 2009.

A disproportionate number of those casualties were children, raising the troubling question of how many of those who died could have been saved, if only they had received help in time.