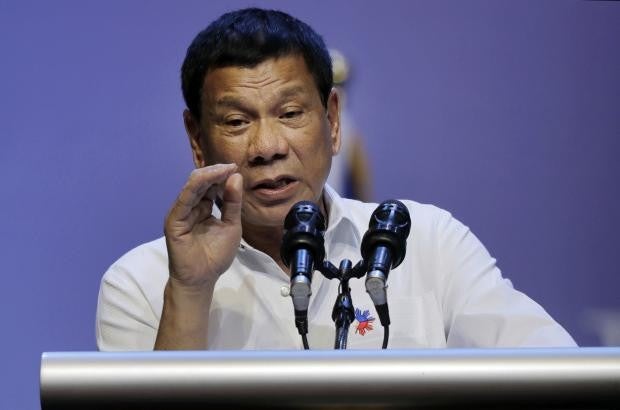 The National Union of Journalists of the Philippines (NUJP) slammed on Thursday President Rodrigo Duterte for his rants against the Philippine Daily Inquirer and ABS-CBN, saying in two speeches in Malacañang that he could not accept “slanted” reports from the two major media outfits.

In statement issued shortly after the speeches, the NUJP called Duterte’s “incoherent and foulmouthed rant” against the newspaper and the TV network was not only uncalled-for but was also “absolutely twisted.”

“Mawalang-galang subali’t napakalinaw na kayo po, at hindi sila, ang bastos,” the NUJP said. “It was a brazen abuse of your immense power as chief executive of this land and only shows how little, if any, appreciation you have of democracy and governance.”

“It is a mindset of the petty tyrant who mistakenly believes public office is an entitlement that allows you to flaunt the laws of the land that both grant you power and ensure the checks that prevent you from abusing that power,” it added.

Duterte earlier cussed out the newspaper and TV station, accusing the two media agencies of being rude, corrupt, and unfair in their reports about him.

“Journalism is always antagonistic, but do not put too much slant [in the reports],” Duterte said in his second speech in the Palace during the awarding ceremonies of the Go Negosyo Inspiring Filipina Entrepreneurs. “You smell bad. The Prietos, the Lopezes – you’re full of shit,”

“That is the truth, Inquirer: You are bullshit, and also ABS-CBN,” he said.

“You put out garbage. Somebody should tell you now, you sons of bitches, you engaged in too much foolishness. Somebody should say: ‘You son of a bitch.” They might be afraid to say it. I will attack, even every day.”

The Inquirer took exception the accusations.

In a statement, Inquirer executive editor Jose Ma. Nolasco stressed that the paper, ever since its founding in 1985, had always aimed at “accuracy, faireness and balance in its reporting.”

he NUJP said that it would not expect an apology from Duterte, but said his curses and threats cannot and will not stop journalists “from fulfilling our duty to inform the people as best we can of what is happening to our country, whether you agree with what we report or not.” /atm