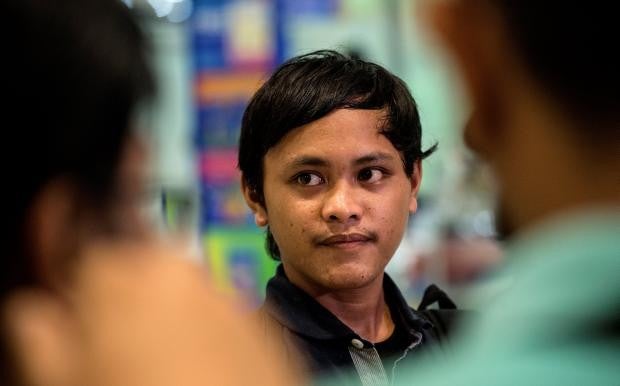 Rolando Omongos, 21, arrives at the Ninoy Aquino International Airport on March 29, 2017. A Filipino fisherman cast adrift in the high seas by a storm survived for nearly two months by drinking rainwater as he helplessly watched his uncle die beside him, the survivor’s mother said March 25. (Photo by NOEL CELIS / AFP)

Rolando Omangos, a 21-year-old fisherman, vowed never to get on a boat again on getting home – on a plane – to General Santos City Thursday morning.

Omangas, after all, had survived nearly two months of drifting at sea off Papua New Guinea living only on rainwater and moss.

On Jan. 10, their small fishing boat got separated from the main fishing vessel and they were was blown off course and set further adrift by Tropical Cyclone Bising.

Omangos said their boat ran out of fuel, preventing them from returning to their mother boat.

The boat had been drifting for 56 days when a Japanese vessel spotted it off Papua New Guinea, which is over 1,300 nautical miles from General Santos City.

He recounted his ordeal at sea, including the death of his uncle.

Out of food, water, and fuel, Omangos said, they had to drink rainwater and eat the moss growing on their boat. They were about a month adrift when his uncle died from hunger and exposure.

He said he did not want to leave behind his uncle’s body, which he tied onto the boat. But he had to let the body go after a week because of the overpowering smell of its decomposition.

“I prayed: Lord please take care of my uncle. I need to live so I can tell people what happened,” Omangos recounted in Filipino.

What kept him strong, he said, were recollections of his uncle’s encouraging words.

“I was able to collect three gallons of rainwater which I drank,” he said. “I ate moss sticking on the boat.”

That was all he could count on until he was rescued by big vessel and was fed gelatin and donuts.

Several vessels, he said, passed by his boat because it was too far and he did not have the energy to wave and shout to get attention.

It was only on March 9 that a ship went near enough that he was able to catch the attention of its crew through a makeshift flag he made out of his orange shirt.

He had to be carried onto the vessel by his rescuers because he was too weak to move. His original weight of 134 pounds had gone down to barely 50 pounds.

Omangos was brought to a medical facility in Rabaul, Papua New Guinea.

As soon as the fisherman recovered, he was put on a flight home.

Arriving on Wednesday night Omangos swore off boats. The fishermen, who only finished grade school, pointed out that he just might continue studying.

Omangos was fetched by a representative of Naia’s inter-agency council against trafficking from the airport and was sent on a flight back home to General Santos City on Thursday morning. /atm