President Rodrigo Duterte went on the offensive on Thursday against the Philippine Daily Inquirer and ABS-CBN, accusing the two media agencies of being rude, corrupt, and unfair in their reports about him. He also warned the Church that it would soon become obsolete.

The Philippine Daily Inquirer took exception to accusations. In a statement, Inquirer executive editor Jose Ma. Nolasco stressed that the paper, ever since its founding in 1985, had always aimed for  “accuracy, fairness and balance in its reporting.”

Following is the full statement of the Inquirer on Duterte’s remarks:

The Philippine Daily Inquirer takes exception to President Duterte’s remarks that the newspaper has been unfair in its coverage of him and his administration.

Since its founding in 1985, the Inquirer has upheld the highest standards of excellence in journalism. Even as we’ve courageously pursued the truth in our coverage, we’ve endeavored to get the administration’s side of any controversy.

In fact, the Inquirer Opinion runs ‘’View from the Palace” every week, where Cabinet officials expound on and explain administration policy – and even the personality of the President himself.

The Inquirer’s wide readership and hundreds of awards, prizes and citations from prestigious organizations here and abroad attest to its adherence to accuracy, fairness and balance in its reporting. 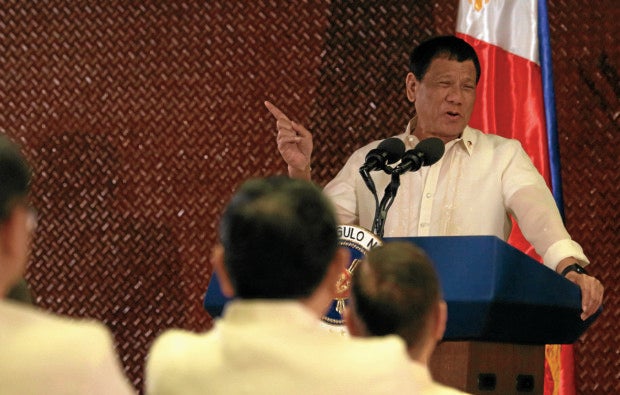 In two expletive-laden speeches in Malacañang, Duterte described the owners of the Inquirer and ABS-CBN as “oligarchs” and called them the scourges of society.

He said he understood the adversarial nature of journalism, but he could not accept “slanted” reports.

“Journalism is always antagonistic, but do not put too much slant [in the reports],” Duterte said in his second speech in the Palace during the awarding ceremonies of the Go Negosyo Inspiring Filipina Entrepreneurs. “You smell bad. The Prietos, the Lopezes – you’re full of shit,”

Media organizations, Duterte said, would publish anything they would be paid to publish.

“These rich people, you think they’re so honest, respected members of society. These sons of bitches are all about money. It’s true,” he said.

The first target of his tirade was the Inquirer, complaining about a what he called a “slanted” report published in the newspaper on his comments about the poor being killed in his bloody drug war.

“Look at the Inquirer,” he said in his first speech, during the oath-taking of his new appointees, including local officials. “What I’m saying is, they are the one ones saying I am killing the poor. Yesterday’s Inquirer was really bullshit, son of a bitch. It’s really garbage. Even during the elections.”

He also said he knew the Inquirer was supposed to be antagonistic. But he said it had “never been fair” to him.

He said he was not scaring the Inquirer, but it would meet its “karma” someday.

He then went on to include ABS-CBN in his rant.

“I will tell you: They really have no shame, including ABS-CBN,” he said.

He was also apparently angry at the reports by Inquirer and ABS-CBN during the 2016 election campaign about the allegations, coming from Sen. Antonio Trillanes IV, that he had P200 million in an undeclared bank account.

He went on to say that the media could request a statement from the Bangko Sentral ng Pilipinas about his accounts, and if he had P200 million, he would resign. If his children could also be proven to be involved in corruption, he would gladly step down as well, he added.

‘I will attack, even every day’

“That is the truth, Inquirer: You are bullshit, and also ABS-CBN,” he said. “ You put out garbage. Somebody should tell you now, you sons of bitches, you engaged in too much foolishness. Somebody should say: ‘You son of a bitch.” They might be afraid to say it. I will attack, even every day.”

He said would not hesitate to share his sentiments with the owners of the two media outfits.

According to him, part of his regret at being president was the presence of members of the media who put out lies.

“If you ask me that I’m very happy to be president? Shit, I’m not,” he said. “I regret it. Because there are members of the press that, son of a bitch, know nothing but lies.”

The 72-year-old Duterte also railed at what he said was speculation that he was sick.

“There is a lot of speculation that I am sick. Why, did your grandfather not die?” he said.

“These sons of bitches are jerks. You Prietos, you Lopezes, did your grandfather live forever?” he went on to ask, addressing the owners of the Inquirer and ABS-CBN, respectively.

“Ulol pala kayo. Mabuti magkababuyan na tayo dito. Eh ano? Di magbabuyan tayo araw-araw (You jerks. We’d be better off smearing each other here. We can do this every day),” he added.

The only advantage of the media owners was that they were rich, he added.

He also said he could engage in tit-for-tat by coming up with his own daily program on PTV, the government TV network, where he would answer their statements against him.

He also threatened to dig into the lives of their children.

“Do not exceed your bounds,” he warned. “I would not go berserk, but I would give you your dues also.”

In attacking the Church, Duterte once more urged his audience to read the book “Altar of Secrets,” a book by investigative journaist Aries Rufo exposing the shenanigans within the church.

“If you tell me you’re still Catholic, I will be impressed with you,” he said. “That religion will become passé in the next 30 years.”

He said the abuses of the men of the cloth would come out. He also criticized priests for collecting money for the Church. There were also priests who were womanizing, he said.

Meanwhile, the National Union of Journalists of the Philippines (NUJP) hit back at Duterte for his tirades against the media.

“Your incoherent and foul-mouthed rant against two of the country’s major media outfits – the Philippine Daily Inquirer and ABS-CBN – was not only unwarranted, it was absolutely twisted,” the NUJP said in a statement.

The president was the one who was rude, not the media agencies, NUJP said.

“It was a brazen abuse of your immense power as chief executive of this land and only shows how little, if any, appreciation you have of democracy and governance,”” it said.

“It is a mindset of the petty tyrant who mistakenly believes public office is an entitlement that allows you to flaunt the laws of the land that both grant you power and ensure the checks that prevent you from abusing that power,” it added.

It also said it would be futile to ask Duterte to apologize or to come to his senses.

But the independent media would not stop doing its job just because of his rants.

“But one thing we can assure you of, Sir, your curses and your threats cannot and will not prevent us, the community of independent Filipino journalists, from fulfilling our duty to inform the people as best we can of what is happening to our country, whether you agree with what we report or not,” NUJP said. /atm