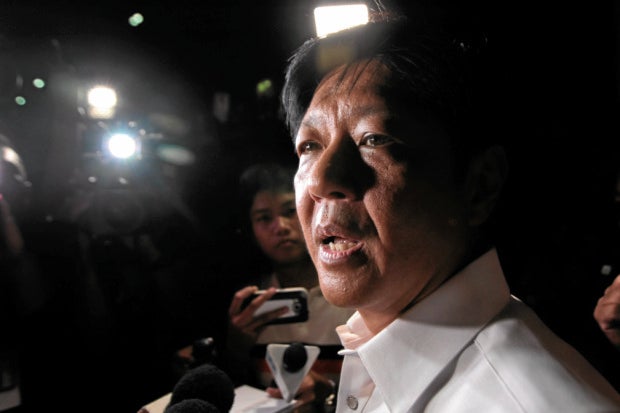 In a 25-page comment, Marcos, through his lawyers led by George Garcia, said Robredo’s motion for reconsideration is another dilatory tactic.

“More than nine months have already gone by and all protestee Robredo has done is to file one dilatory motion after another.  If protestee Robredo has nothing to hide, then she should do everything in her power to encourage – rather than hinder – this election protest to move forward,” Marcos said in his comment/opposition to Robredo’s motion.

“The millions of voters who trooped to the polls nine months ago deserve no less. They want the truth to come out. The sooner the better,” read the comment.

Marcos also urged the PET to order the immediate collection, retrieval, transport and delivery of all ballot boxes from all 36,465 clustered precincts during the May 9, 2016 elections.

The former senator also urged the PET to push through with the preliminary conference in the case as provided in Rule 29 of its rules for the conduct of manual recount, judicial revision, technical examination and forensic investigation under Rule 37 as he sought in the protest.

Marcos also mentioned recent developments, particularly the move to impeach Robredo because of her controversial video message against President Duterte and his administration sent to the United Nations commission on narcotics drugs.

“There is clearly a well-funded concerted effort to undermine the Duterte administration, just recently, Robredo’s video message on the alleged extra-judicial killings caused quite a stir among our patriotic countrymen,” he lamented.

“Robredo cannot have it both ways. She cannot keep claiming that she won the elections fair and square and yet, behind everyone’s back, she keeps finding ways to stop the truth from coming out,” Marcos said.

Earlier this year, PET  dismissed Robredo’s bid to dismiss the election protest for lack of jurisdiction.

PET rejected Robredo’s argument that the matter should have been raised before Congress when it was still acting as the National Board of Canvassers./rga

Read Next
NHA to check eligibility of Kadamay members as eviction halted
EDITORS' PICK
Powered by style, innovation and passion
Why Tagle is a leading papal contender
House energy committee chair Arroyo bats for cheap electricity
KWF has no power to ban, censor written works – Lagman
In Borongan, nuns play hoops (not mahjong)
A laptop that maximizes your WiFi so you can maximize your productivity
MOST READ
Why Tagle is a leading papal contender
Arjo Atayde reveals proposal to Maine Mendoza was ‘more than a year’ in the making
My neighbor FVR: From soldier to president
Gilas gets solid core with Clarkson, Sotto planing in
Don't miss out on the latest news and information.