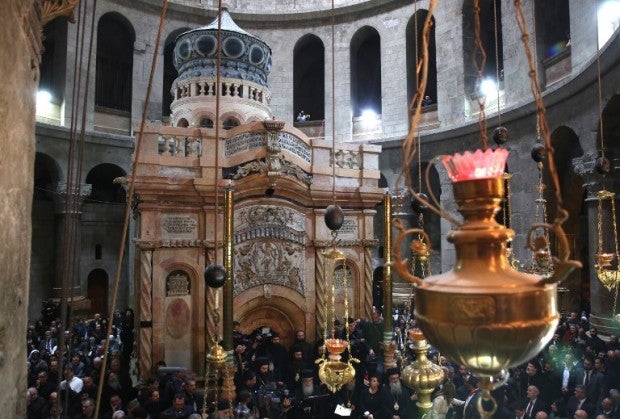 Christian clergymen and other guests attend a ceremony next to the Edicule at the Church of the Holy Sepulchre, traditionally believed to be the burial site of Jesus Christ, in Jerusalem’s Old City, on March 22, 2017. The ornate shrine was reopened at a ceremony in Jerusalem following months of delicate restoration work. AFP

JERUSALEM — The newly restored shrine surrounding what is believed to be Je sus’s tomb was unveiled at a ceremony in Jerusalem Wednesday following months of delicate work and in time for crowds of Easter visitors.

Religious leaders in traditional robes addressed a ceremony at the Church of the Holy Sepulchre, built at the site where Christians believe Jesus was crucified and buried.

READ: GOOD FRIDAY: Why did God have to die on the cross? | EASTER: Did Jesus really rise from the dead?

They stood in front of the ornate 19th-century edicule surrounding the tomb, its onion-shaped dome above, as hymns were sung.

After speeches, they entered the edicule to pray.

Dignitaries including Greek Prime Minister Alexis Tsipras and Orthodox Patriarch of Constantinople Bartholomew I, considered the spiritual head of Orthodox church leaders, were in attendance.

Greek Orthodox Patriarch Theophilos III of Jerusalem, in his address to the ceremony, called the restoration “not only a gift to our Holy Land but to the whole world.”

“For the first time in over two centuries, this sacred edicule has been restored,” he said, referring to the shrine completed in 1810 surrounding the tomb.

Father Francesco Patton, who as custos of the Holy Land oversees sacred sites in the region, called it the “restoration of the most important site for all Christianity.”

The shrine is a key part of the Church of the Holy Sepulchre in Jerusalem’s Old City.

Centuries of candle smoke and visiting pilgrims had left it discolored and almost black.

Parts were also coming loose, with warnings that it was structurally unsound and posed a risk to the millions of pilgrims who visit every year.

‘The color of hope’

Following a $3.7 million (3.4 million euro) renovation led by the church’s three main Christian denominations, the tomb has been painstakingly restored to its former glory — including a warm reddish-yellow coloring.

“Before this the monument was black,” chief renovator Antonia Moropoulou told AFP.

“This is the actual color of the monument, the color of hope.”

Unlike other parts of the church, which were renovated between the 1960s and 1990s, the edicule had been neglected.

Moropoulou said restorers systematically dismantled, cleaned and renovated almost all of the edicule, including the columns and upper and inner domes.

A window has been installed to allow pilgrims to see the bare stone of the ancient burial cave for the first time.

The new structural integrity means a protective cage installed 70 years ago by the British is no longer necessary.

In October, perhaps the most dramatic moment in the renovation occurred when the cave thought to be the tomb of Jesus was opened for the first time in centuries.

Marble slabs were removed to allow for the chamber’s reinforcement.

They found a top slab dating from the era of the Crusades, indicating that the tomb had not been opened for 700 years, Moropoulou said.

Underneath they found another from the era of Constantine the Great, the emperor who began the Roman empire’s transition to Christianity in the fourth century AD.

“When we opened the slabs we discovered within the internal masonry all the layers of history — from Constantinian to Byzantine, to Crusaders to Renaissance,” Moropoulou said.

On Wednesday, Moropoulou pointed out that visits were able to continue throughout most of the work on the shrine.

“Only for 60 days while the tomb was open pilgrims didn’t go in,” she said, adding that they “worked day and night.”

Whether the site is indeed the place of Jesus’s burial has long been a matter of dispute.

Some Christians believe he was buried in the Garden Tomb, outside the walls of Jerusalem’s Old City, but Moropoulou said their findings supported the Sepulchre as the location.

Asked if the slabs supported the argument that Jesus was buried there, she said it was “not a matter of an argument”.

“It is a matter of revealing a tomb which is alive and which is influencing us working here and all the world.”

The work is not the end of plans to renovate the church, located in Israeli-occupied east Jerusalem, which the Palestinians see as the capital of their future state.

A fresh $6 million renovation to the churches floors is needed, including protecting from damp.

“This cannot be the end of the work, this is just the beginning,” Archbishop Pierbattista Pizzaballa, apostolic administrator of the Latin Patriarch of Jerusalem, told the crowd.

The Greek Orthodox, Armenian and Roman Catholic denominations share custody of the church, but disputes between the three have led to renovations being delayed for decades.

The shrine was briefly closed by Israeli authorities in 2015 over safety fears.

Pizzaballa admitted many thought poor relations between the churches made coordination on such a large project impossible.

“This goal was generally considered not achievable,” he said.

“But now, despite this common belief, we are here to celebrate this event.” CBB