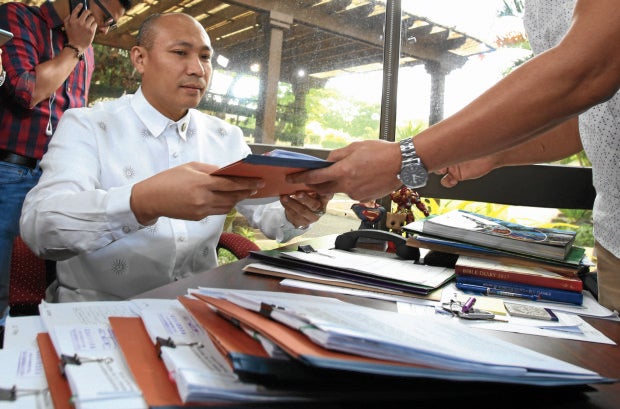 COMPLAINT VS DUTERTE Magdalo Rep. Gary Alejano, who figured in two coup attempts against President Gloria Macapagal-Arroyo in 2003 and 2007, is training his sights this time on President Duterte by filing his impeachment complaint at the Office of the Secretary General.—NIÑO JESUS ORBETA

Just nine months in office, President Rodrigo Duterte is facing the first attempt to impeach him on accusations that he is responsible for the deaths of 8,000 drug offenders, that he has amassed P2.2 billion in unexplained wealth, and that he has committed other high crimes.

The complaint was filed on Thursday by Magdalo Rep. Gary Alejano, a former Marine captain who joined two failed coup attempts in 2003 and 2007 led by then Navy Lt. Antonio Trillanes IV, now a senator, against then President Gloria Macapagal-Arroyo.

“We are of the firm belief that President Duterte is unfit to hold the highest office of the land and that impeachment is the legal and constitutional remedy to this situation,” Alejano told reporters.

“There is nothing extralegal here. We are not staging a coup d’etat or any other means to oust Duterte,” Alejano said, bristling at suggestions his move might be construed as an attempt to destabilize the Duterte administration.

The 16-page complaint cited as grounds for impeachment culpable violations of the 1987 Constitution, betrayal of public trust, and graft and corruption.

The complaint took the President to task for his “state policy” of inducing policemen, other law enforcement authorities, and vigilante groups to kill more than 8,000 people “who were merely suspected of being drug offenders.”

Alejano, 44, sought to pin down Mr. Duterte as the brains behind of the so-called Davao Death Squad (DDS) when he was mayor there, based on testimonies in the Senate of confessed assassins Edgar Matobato and Arturo Lascañas.

Mr. Duterte was also accused of committing graft and corruption in the hiring of 11,000 “ghost employees” when he was mayor.

Alejano also accused the President of amassing P2.2 billion in “deposits and credits that flowed into his numerous bank accounts,” based on copies of transactions that were attached to the complaint. The case was first raised by Trillanes during the presidential campaign.

A vote of at least one-third of the 292-member House of Representatives is needed to impeach the President.

With more than 260 of the lawmakers belonging to a pro-Duterte bloc, Alejano acknowledged that he was facing an “uphill climb.”

Speaker Pantaleon Alvarez, a bosom buddy of the President, shrugged off the move: “We are all entitled to our own stupidity.”

“All charges are fabricated. They seem to believe their own lies,” he said in a text message to reporters.

Fariñas noted another flaw of the impeachment complaint—referring to acts that Mr. Duterte supposedly committed before he became President.

“An official is impeached for acts committed in his present office,” he said.

“Since the allegations made while he was mayor were widely publicized and known by the voters when they elected him President, the clear mandate given to him by the people has to be respected. This is the jurisprudence even with respect to elected or reelected local officials,” Fariñas said.

“It has turned out that the Senate hearing on the alleged DDS was a preview or dry run for the impeachment complaint,” he added.

Alejano admitted that he felt trepidation in moving against the President, a firebrand leader whose fiercest critic, Sen. Leila de Lima, is now in jail.

“Definitely, we are only human. We feel fear. But will this prevail over our mandate? Even as soldiers, we felt fear,” he said.

Alejano said he was more concerned about the impact of the President’s strongman rule  and his dictatorial tendencies on the people.

He acknowledged the President’s continuing popularity  and high approval ratings among Filipinos, but he said he was not discouraged.

“We believe he should answer for the crimes he has committed,” he said.

Alejano said he might have difficulty getting House support for his impeachment bid.

Mr. Duterte’s popularity rating remains high and he enjoys big support in both houses of Congress.

“We know the numbers are against us, and we are facing a big challenge,” Alejano said. “But we still believe that impeachment would be fought not only inside the halls of Congress but also outside.”

“There’s the Church, schools, civil society and the many Filipinos who did not vote and do not support and not in favor of the policies under President Duterte,” he said. —WITH REPORTS FROM AP