One seat to separate Duterte, Robredo at PMA rites 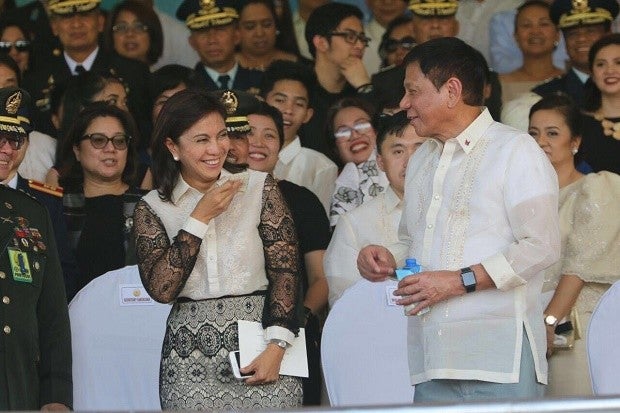 President Rodrigo Duterte and Vice President Ma. Leonor “Leni” Robredo (right and left, foreground) share a light moment in this photo taken during their first meeting after taking office in July 2016. The two highest officials of the land will again share the stage on Sunday, March 12, 2017, when they attend the graduation rites of the Philippine Military Academy in Baguio City. PHOTO FROM LENI ROBREDO TWITTER ACCOUNT

The country’s two highest leaders, whose relationship got strained after Robredo quit her Cabinet post, will be seated one seat away from each other.

Duterte will be the guest of honor and speaker at the rites, where he will award the presidential saber to 23-year old Cadet First Class Rovi Mairel Valino who topped 167 mistahs of the “Salaknib” Class of 2017.

The PMA graduation will be the second time Duterte and Robredo will meet this year after the Legislative-Executive Development and Advisory Council (Ledac) session in January.

In December 2016, Robredo resigned from Duterte’s Cabinet just 150 days after she took her oath as chair of the Housing and Urban Development Coordinating Council (HUDCC).

The resignation followed Duterte’s decision to bar her from attending Cabinet meetings. CBB

No tension in meeting with Duterte after quitting post—Robredo