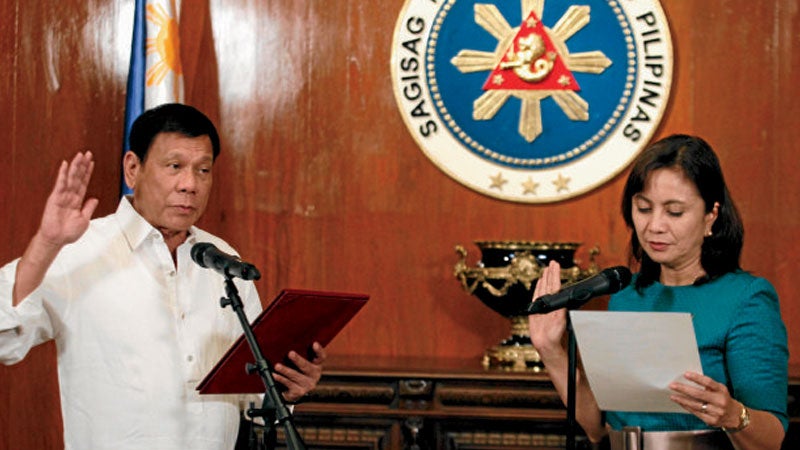 IRRECONCILABLE DIFFERENCES Less than threemonths after swearing in Vice President Leni Robredo as chair of the Housing and Urban Development Coordinating Council, President Duterte cites irreconcilable differences when he instructed his aides that she can no longer attend Cabinet meetings. —INQUIRER PHOTO

Vice President Leni Robredo is resigning from the Cabinet of President Rodrigo Duterte just 150 days after she took her oath as chair of the Housing and Urban Development Coordinating Council (HUDCC).

Robredo on Sunday said she was giving up her Cabinet post, citing a Malacañang official’s instruction barring her from attending its meetings.

Last night, Cabinet Secretary Leoncio “Jun” Evasco Jr. told the Inquirer that President Duterte had instructed him to inform Robredo and Patricia Licuanan, chair of the Commission on Higher Education, to stop attending Cabinet meetings due to “irreconcilable differences.”

Licuanan is an appointee of then President Benigno Aquino III.

Evasco did not elaborate on what the irreconcilable differences were.

Robredo, a member of the Liberal Party, has assailed the extrajudicial killings in the Duterte administration’s war on drugs and opposed the burial of the dictator Ferdinand Marcos at Libingan ng mga Bayani. Mr. Duterte supported the Marcos burial at Libingan.

The Vice President said the instruction, relayed by the President’s special assistant, Christopher “Bong” Go, was for her to “desist from attending all Cabinet meetings starting this Monday, Dec. 5.”

“This is the last straw, because it makes it impossible for me to perform my duties. Hence, I am tendering my resignation from the Cabinet on Monday,” Robredo said in a statement issued on Sunday night.

In an interview over radio station dzMM last night, Evasco said that while Robredo was asked to desist from attending the Cabinet meetings, there was “no instruction for her to be terminated from her position.”

When told that Robredo was tendering her resignation, Evasco said: “If that’s the case, we will be constrained to look for somebody who will handle HUDCC.”

Robredo became a member of the Cabinet in her capacity as chair of HUDCC, the highest policymaking body for housing.

As chair of HUDCC, the agency has had “solid accomplishments” over the past five months, she said.

This was despite the P19-billion budget cut for all key shelter agencies and inaction on appointment recommendations, she added.

The Vice President said resigning from the Cabinet would still allow her to “continue to support the positive initiatives of this administration and oppose those that are inimical to the people’s interest.”

“[T]he events of recent days” indicate that “a plot to steal the vice presidency… is now being set into motion,” Robredo said.

She said that “as your duly elected Vice President, I will not allow the vice presidency to be stolen.”

“I will not allow the will of the people to be thwarted. I will continue to serve the Filipino family and fulfill their dream for a better life,” she said.

Robredo, who won with 14,418,817 votes, defeated Sen. Ferdinand “Bongbong” Marcos Jr. by a razor-thin margin of 263,473. Marcos is protesting her proclamation in the Presidential Electoral Tribunal.

On Oct. 20, during his state visit to China, Mr. Duterte brought up the possibility that “if [Bongbong] wins in his protest, he could be our Vice President.”

Evasco said that the President’s order for Robredo to stay away from the Cabinet meetings had nothing to do with the electoral protest filed by Marcos Jr.

“There was no mention of that,” the Cabinet Secretary said. —REPORTS FROM VINCE F. NONATO AND MARLOS RAMOS