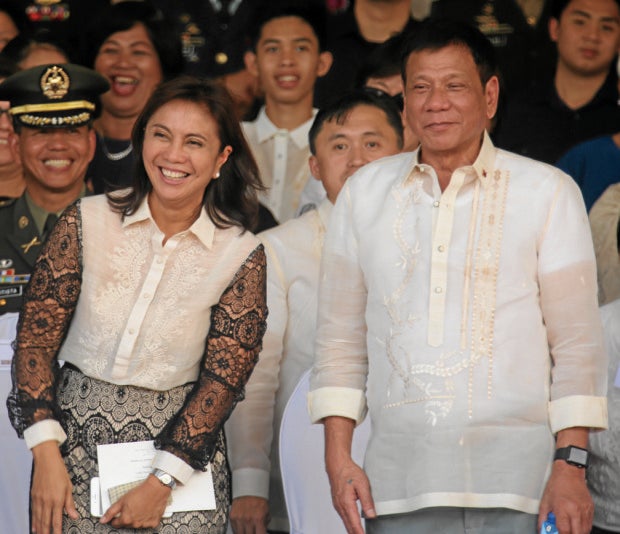 NAGA CITY—Despite the seeming rough start in their working relationship that was made more glaring by the omission of a government position for her,  Vice President Leni Robredo is now more hopeful of a good partnership with President Rodrigo Duterte.

“Yesterday was exciting because I met the President for the first time. And just for the record, he was very, very nice to me. I am hopeful that despite the seemingly rough start, we will have a good partnership, all for love of the country,” Robredo said.

Robredo and Duterte finally met on Friday during the turnover of command ceremony at the Armed Forces of the Philippines headquarters in Camp Aguinaldo, which saw Gen. Ricardo Visaya take over as AFP Chief of Staff.

Their exchange at the AFP grandstand included plans for a courtesy call in Malacañang.

“When I came back to my office yesterday, I told my staff to contact the Office of the President to set the date for the courtesy call at the soonest available time,” she said.

Robredo, who described Mr. Duterte as “kind and sincere to her,” said he assured her of a meeting with him where they could have more discussions.

“When I told him that I would set an appointment, I felt that I was welcome. I was prepared for the worst, that he would ignore me. But he said, ‘at last I met you,’” Robredo said.

Robredo said she hoped the meeting with the President would happen sometime next week.

“I was relieved when we first met because I had lots of apprehensions about him,” Robredo said, adding that Duterte broke the ice when he joked about offering her the coco water he was about to drink.

Robredo said Mr. Duterte exceeded her expectations for he proved to be nice during their first meeting.

“Hopefully, that will be the start of harmonious and cordial relations,” she said.

Meanwhile, during a luncheon here on Saturday, Robredo asked for continued support from her high school batchmates at the Colegio de Sta. Isabel (now Universidad de Sta. Isabel) and Naga City officials for the challenges ahead. She also asked for support from officials of the University of Nueva Caceres where she obtained her law degree in 1992.

“The support you gave me should not end with my winning the elections… more so now, I need your prayers and support,” she said.

Robredo said she planned to return to Naga City every week because coming home to the city kept her grounded. But the travel expenses would also make her think twice.

When she took a bus to Naga City for the thanksgiving party and other activities on Saturday, several supporters raised security concerns.

“Like the President, Vice President Leni Robredo is now the property of the Philippines so she must take utmost precaution and consider security as a primary concern in traveling,” Tuazon said.

He said that if Robredo continued to ride the bus, she would need another busload of PSG members to secure her throughout the more than 300-kilometer ride from Manila to Naga.

Robredo arrived here at 5:30 a.m. at Central Bus Terminal aboard a Peñafrancia bus accompanied by several members of her staff and the Presidential Security Group.

She was greeted by a number of cameramen from television networks as she alighted from the bus. She responded with a smile to people in the terminal who called her by her new title.

Robredo went straight to her house in Barangay Dayangdang to rest and freshen up before her 9 a.m. engagement at Naga Central School where she swore in officers of its Parents-Teacher Association.

Eric Dolong, an officer of the PTA whom she inducted, said he disagreed with the decision of Robredo to continuously take bus rides to Naga City.

“Vice President Robredo should now take into consideration the security aspects of travel because she is now the second highest official of the land. She should take her safety seriously,” Dolong said. TVJ