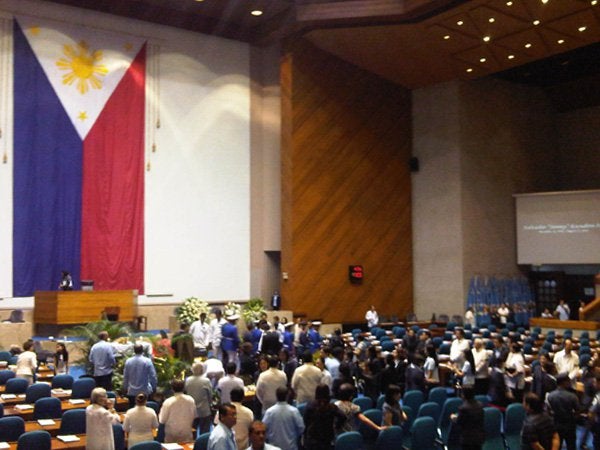 Opposition lawmakers on Tuesday said the bill seeking to restore the death penalty that is pending in the House of Representatives is now “on a bargain sale” after the leadership became open to limiting it to drug-related offenses.

In a press conference at the House of Representatives, Albay Rep. Edcel Lagman and Akbayan Rep. Tom Villarin agreed that House Bill 4727 is now being bargained in a bid to ensure its prompt passage in Congress.

This after Oriental Mindoro Rep. Reynaldo Umali, chairperson of the House justice committee, said the majority is more open to passing the bill if it would be limited to drug-related offenses (except possession of drugs, which will be punished with the maximum offense of life sentence).

Umali said more lawmakers are leaning toward passing the bill now that it does not impose mandatory death sentence and if it would be limited to drug cases.

“From 21 crimes, to one, the death penalty is now on a bargain sale,” Villarin said.

VIllarin said the threat of the leadership to strip lawmakers opposed to the death penalty of their key committee positions is a way to “torture” lawmakers into changing their positions.

“The House is being subjected to torture,” Villarin said.

Lagman said regardless of the number of crimes the death penalty would cover, the bill is an “abhorrent” measure intended to support President Rodrigo Duterte’s bloody narcotics crackdown that has claimed over 7,000 lives.

“The death penalty is just an instrument on the part of the House leadership to support the President’s deadly campaign against the so-called drug menace,” Lagman said.

Restoring the death sentence will also violate the country’s treaty obligations toward the abolition of the capital punishment, according to Lagman.

He said he will continue to oppose the bill, which was railroaded into the period of individual amendments, in a bid to reduce the list of heinous crimes covered by the proposal to virtually zero or to totally eliminate the death sentence.

“Tom (Villarin) is right. They put it in bargain sale… It’s emasculated, but not eliminated. The death penalty is still there,” Lagman said.

“We are going to propose individual amendments that will eliminate all of those, including the lethal injection, hanging and firing squad,” he added.

With the bill limited to drug-related offenses, it would no longer punish with death the heinous crimes of rape, plunder and treason.

The bill will also give the judge the leeway whether to impose life sentence or the maximum penalty of death on convicts.

The majority caucus initially wanted to remove plunder from the list of heinous crimes, raising criticisms of conflict of interest by lawmakers who do not want to punish public officials accused of the non-bailable crime of amassing at least P50-million in ill-gotten wealth with death.

But the caucus put back plunder on the list after Speaker Pantaleon Alvarez refused to remove the offense from the bill.

The bill, however, stated that the death penalty should not be imposed on children below 18 years old or over 70 years of age at the time of the commission of the crime. The penalty to be imposed on convicts are hanging, firing squad and lethal injection. The bill will also allow the judge the leeway to determine whether to impose death penalty or life imprisonment.