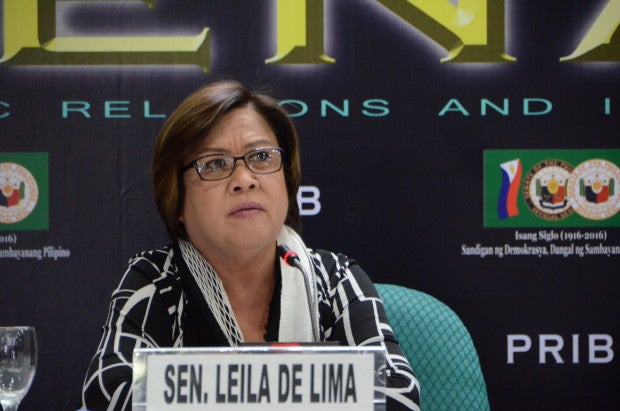 Sen. Leila de Lima announced on Thursday that she would voluntarily surrender to authorities, following the issuance of arrest order against her for alleged involvement in illegal drugs.

But since she had not received the arrest warrant by early evening, De Lima said she would go home first to spend the night with her family.

(“Since at this very moment – 7:20 p.m. – no search warrant has been served to me, I would want first to go home to be with my family and to get the things I would bring with me to jail.”)

Her colleagues in the Liberal Party – Senate President Pro Tempore Franklin Drilon and Senators Francis Pangilinan and Bam Aquino – were all present at the news conference.

While she called the arrest order “questionable,” De Lima assured the public that she would face the charges against her and would not go into hiding.

She said the arrest order was questionable because the court was scheduled to hear on Friday a motion to quash that she filed on the three charges against her. In fact, she said, the Department of Justice had even asked the court to postpone the hearing to March 3.

Despite this, the senator said, her fight would continue. But she asked the public to pray.