In show of force, thousands of Catholics rally vs killings 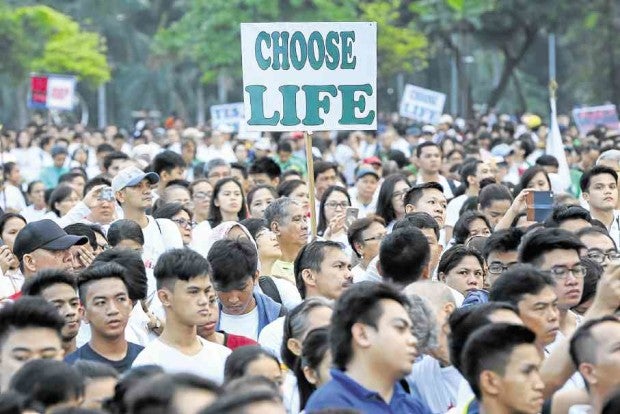 Thousands of Catholics gathered in Manila on Saturday in a “show of force” to demand an end to President Rodrigo Duterte’s war on drugs that has left over 7,000 dead and attempts by his allies to revive the death penalty.

Led by the bishops the President had earlier berated as morally corrupt, the crowd was estimated by organizers and the police at anywhere between 10,000 and 50,000 people. Many wore white shirts and carried rosaries and messages denouncing the killings as they sang religious hymns.

It was the biggest public gathering thus far of the Catholic Church since President Duterte took office last year, and was clearly meant to send the message that it remained a political force years after it galvanized the opposition movement and helped remove two presidents in the past—dictator Ferdinand Marcos in 1986 and Joseph Estrada in 2001.

The three-hour activity was organized by a lay organization called the Sangguniang Laiko ng Pilipinas, but it gathered church personalities led by Manila Archbishop Luis Antonio Cardinal Tagle and the outspoken Archbishop Socrates Villegas of the Catholic Bishops’ Conference of the Philippines (CBCP).

“If the response to violence is also violence, we merely abet the violence,” Tagle told the gathering. “We should not be propagating violence but challenging it with nonviolence.”

The “Walk for Life” rally was also meant to show opposition to the impending passage of a law reimposing the death penalty, as well as highlight the church’s stand against abortion, blasphemy, corruption and illegal drugs.

Those who joined carried placards that read: “Yes to life,” “No to death penalty,” “Choose life, ”“Stop death penalty,” “No to culture of death,” and “No to extrajudicial killings, yes to extraordinary joy and happiness.”

The faithful came from at least 13 dioceses and archdioceses, including from the cities of Manila, Cubao, Imus, Malolos, San Jose in Nueva Ecija, Legaspi and Bontoc-Lagawe.

While the crowd was relatively small compared to the country’s Catholic population of more than 80 million, prelates were pleased with the outcome. Hundreds of prolife advocates also gathered in Cebu, as well as in the northern city of Dagupan. 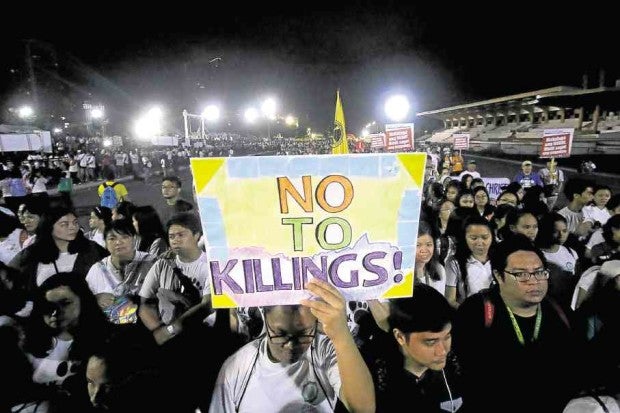 Manila Auxiliary Bishop Broderick Pabillo called it “a show of force,” adding that they did not expect thousands to take part in the p rayer rally.

“We didn’t expect that many would come. This means there’s a need for Catholics  to express themselves. They were not forced to go out at dawn. They really wanted to be here,” Pabillo said.

Others who were present at the rally were Bishop Honesto Ongtioco of Cubao, Bishop Pablo Virgillo David of Caloocan, Bishop Valentin Dimoc of Bontoc-Lagawe and Bishop Antonio Tobias of Novaliches.

Pabillo, head of CBCP’s Episcopal Commission on the Laity, noted that the march was hastily organized although similar activities were done in dioceses throughout the country. On Saturday, members of the church chanted prayers and sang hymns as they marched to condemn a “spreading culture of violence.”

“We have to stand up. Somehow this is already a show of force by the faithful that they don’t like these extrajudicial killings,” Pabillo  told reporters before addressing the crowd. “I am alarmed and angry at what’s happening because this is something that is regressive. It does not show our humanity.”

The people, he said, “are standing up for life.”

“A culture of death like the extrajudicial killings and the death penalty, they don’t want that,” he said.

Pabillo said they hoped that President Duterte would hear their message, and reverse the government’s stance.

“He said he represents the people, that he wants to speak for the people. This is what they want. If he is logical, he will listen,” the bishop said. “We should tell our lawmakers, you represent us, you do not represent the ones on top. We should show that we are standing up for life.”

Villegas, the CBCP president, said he hoped that God would listen to his flock’s collective prayers.

“What is material is quality, not quantity. If each person here sincerely stands up for life, that is the quality of participation that we want,” Villegas said.

Duterte, 71, has attacked the Church as being “full of shit” and “the most hypocritical institution” for speaking out against a campaign that he claims would save generations of Filipinos from the drug menace.

About eight in 10 Filipinos are Catholic, making the former Spanish colony of more than 100 million people Asia’s bastion of Christianity.

The Church had initially kept mum on the drug war, but as the death toll of mostly poor people mounted, it began late last year to call for the killings to end.

Villegas said the dawn rally was highly symbolic “because it is during these hours that we find bodies on the streets or near trash cans.”

“Dawn, which is supposed to be the hour of a new start, is becoming an hour of tears and fears,” he said.

Earlier this month, he issued the Church’s strongest statement against the drug war, warning against a “reign of terror” in poor communities.

De Lima, who was charged on Friday for allegedly running a drug trafficking ring using criminals in the country’s largest prison when she was justice secretary, joined the rally to show her solidarity.

“For as long as I can, I will continue to fight. They cannot silence me,” said De Lima, who is expecting to be arrested in the coming days.

Bone cancer survivor Lucy Castillo, 56, turned up in a wheelchair along with dozens of other people with disabilities.

“When I was in so much pain, I could have taken my life, but I did not. Only God can take it,” she told AFP. —WITH REPORTS FROM ADOR VINCENT MAYOL IN CEBU, AFP, AP AND REUTERS 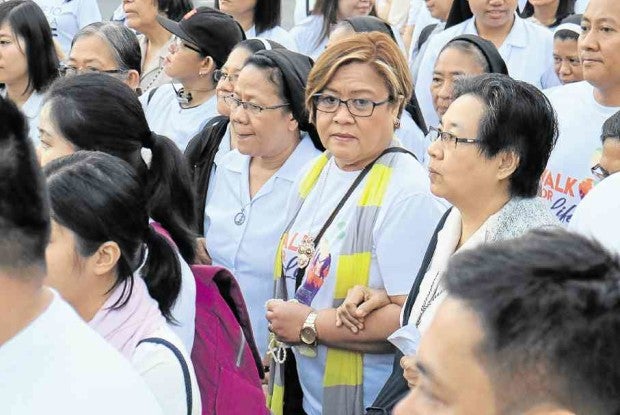 Sen. Leila de Lima joins nuns and other members of the Catholic faith in an early morning rally in Luneta. —Photos by NIÑO JESUS ORBETA