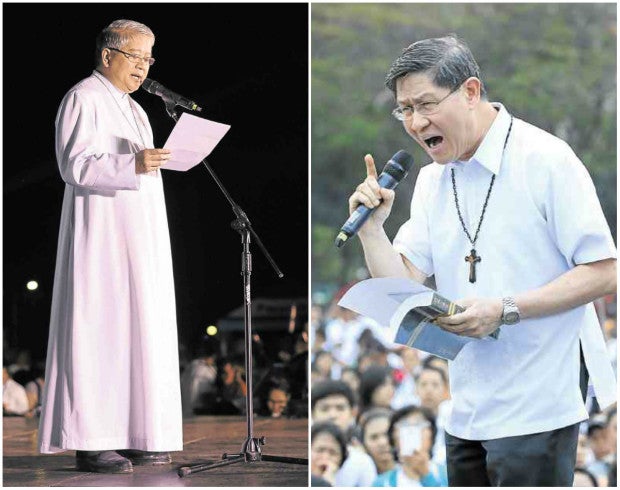 By urging Filipinos to join the “Walk for Life” against widespread drug killings and the return of capital punishment, the Catholic Bishops’ Conference of the Philippines (CBCP) has thrown down the gauntlet at President Duterte and set the stage for another classic church-state confrontation.

“Let us face those who attempt to cast fear among the people and show them our courage,” CBCP President Archbishop Socrates Villegas told thousands of ralliers on Saturday morning at Rizal Park in Manila.

“We will not be bullied or intimidated,” declared Bontoc-Lagawe Bishop Valentin Cabbigat Dimoc, a burly Cordillera native.

Manila Archbishop Luis Antonio Cardinal Tagle called for “active nonviolence” in opposing extrajudicial killings (EJKs) as a result of the government’s war on drugs. “If the response to violence is also violence, we merely abet the violence,” Tagle said. “We should not be propagating violence but challenging it with nonviolence.”

But he also clarified that what was needed was “not passive but active nonviolence.”

Clearly, Church leaders were calling for active resistance to the Duterte government’s draconian measures at checking the 2drug menace and imposing law and order.

Villegas said the choice to hold an early-morning prayer rally was significant because many of the victims of EJKs were found at dawn.

“Why in the early hours of the day? This is simply because during this time when victims are found along the road or in garbage heaps,” Villegas said, as he urged Filipinos to banish fear and “walk with the victims and their families.”

“This Walk for Life is for them,” Villegas said. “We will walk and we will stand for them.”

Clearly the head of the episcopal conference was saying the Church wouldn’t tolerate EJKs and the restoration of the death penalty that the bishops felt was antipoor, as reflected in how Manila Auxiliary Bishop Broderick Pabillo defined capital punishment—“it is punishment for those without capital.”

Good Shepherd Sister Regina Kuizon, chair of the Association of Major Religious Superiors of the Philippines (AMRSP), reminded Catholics of Pope Francis’ wish for a world “free of the death penalty.”

“Since December we have lobbied at Congress (against) the death penalty,” Kuizon said. “Nuns have done room-to-room campaigns at the House of Representatives for them to favor life instead of death.”

Kuizon reminded lawmakers that capital punishment “brings no justice to victims but instead fosters vengeance.”

“This Walk for Life is not to defend the drug addicts or the killers,” Villegas said. “Criminals ought to be arrested, prosecuted, sentenced and jailed to correct the wrongdoings they committed. They ought to be judged by the court of law and never by the (barrel of the gun) or extrajudicial means.”

Villegas added that all Christians should unite against the evils of “ABCDE”—“abortion, blasphemy, corruption, drugs, and executions.”

He also scored President Duterte for cursing the Church and doubting God’s existence.

“This Walk for Life is not a protest but a commitment to the sacredness of life given by God,” Villegas said.

Although it was the Council of the Laity of the Philippines or “Layko” that organized the Walk for Life, the CBCP  gave the march its imprimatur by encouraging people of other faiths to join the Rizal Park rally.

Lay people from as far as the Cordilleras in Luzon joined the walk. Ifugao elders from the Diocese of Bontoc-Lagawe in Ifugao and Mountain Province performed a dance ritual to protest Congress’ efforts to restore the death penalty and the EJKs of drug suspects around the country.

Even non-Catholic Christian groups heeded the CBCP’s call.  Staff and students of the Institute for Studies in Asian Church and Culture put out streamers declaring, “Evangelicals against EJK: Choose life that we may live (Deuteronomy 30:19).”

Perceived to have been inexplicably silent as the drug-related killings climbed past the 7,000 mark, the CBCP finally broke its silence after its biannual meeting in January, and condemned what it perceived as a “reign of terror” since the President came into power.

Speaking during the Meet Inquirer Multimedia forum on Feb. 13, Villegas stressed that bishops had long condemned the drug killings. He added that the Archdiocese of Lingayen-Dagupan held a Mass for the victims as early as September 2016.

“I’m not defending my brother bishops, but what I am saying is we have not been quiet … Fortunately or unfortunately, it is not covered by media or social media but we have been doing our work on the ground,” he said.

Moreover, AMRSP, which groups the heads of religious congregations for men and women, has condemned the killings as early as August last year, warning that they could lead to “a culture of impunity.”

“We are alarmed at the silence of the government, groups and majority of the people in the face of these killings. Ubi boni tacent malum prosperat. Evil prospers where good men are silent,” said the statement signed by Franciscan priest Cielito Almazan and Kuizon, cochairpersons of AMRSP.

“Is this lack of public outcry a tacit approval of what is happening? Is it fear that prevents people from speaking out? Whatever the reason, this problem, if it remains unchecked, leads to a culture of impunity.”

Kuizon said Catholic religious orders were “in solidarity with the families of victims.”

“Several congregations have centers that respond to the needs of those in need of rehabilitation,” Kuizon added.

But President Duterte himself in his anti-Church rhetoric has belied the Church has not been doing anything.

“I’m really appalled by so many groups and individuals, including priests and bishops, complaining about the number of persons killed in the operation against drugs,” he said in a speech in Zamboanga last October. “If I stop, the next generation would be lost.”

The President has likewise asserted that the Church had no moral ascendancy because of its own record of abuses.

Clearly the bishops are now rallying “men and women” of the laity to oppose the killings and the death penalty revival.

Cardinal Tagle referred to the need to cultivate a “culture of nonviolent political action.”

Tagle said all Christians and other Filipinos should be aware of actions and measures happening in their midst—abortion, environmental destruction, graft and corruption, and EJKs.

“One important aspect of this Walk for Life is strengthening and propagating the culture of nonviolent political action,” he said.

Caloocan Bishop Pablo Virgilio David disclosed that one of his diocesan drug-rehab volunteers had just been shot down by “masked men with bonnets.”  He urged the ralliers to inculcate a culture where life is respected. “Yes to the culture of life, no to the culture of death,” he added.

Pabillo, bishop-adviser of Layko, urged ralliers to lobby in Congress against the death penalty and a measure to lower the age of criminal liability to nine so as to send kids to adult prisons, not juvenile reformatories.

The challenge now is for the bishops, the religious and the laity to consolidate the powers unleashed by the Walk of Life and channel them as effective political action to check the perceived excesses of the Duterte administration and stop “antilife” legislations in Congress.

Read Next
Germany’s Merkel backs free press amid Trump media criticism
EDITORS' PICK
Vietnam’s ‘crazy guy’ aims to save ocean from waste
Marcos-era elections: Not what his son signed up for
WHO says no evidence healthy children, adolescents need COVID-19 boosters
Gear up and get ready to play with Yamaha Mio Gear
Acer starts the year off strong with the Aspire Vero National Geographic Edition
Over 3 Million worth of prizes to be won at Smart Padala’s SENDali Manalo Promo!
MOST READ
‘Sampal sa gobyerno:’ Drilon wants unvaxxed PAO chief barred from working
Vice mayor slams Vico Sotto for turning Pasig into a ‘puro palabas’ city
Jose Manalo’s son Benj pays tribute to late mother: ‘You’re a testimony of God’s love’
Guevarra to Acosta: Obey rules on unvaccinated
Don't miss out on the latest news and information.