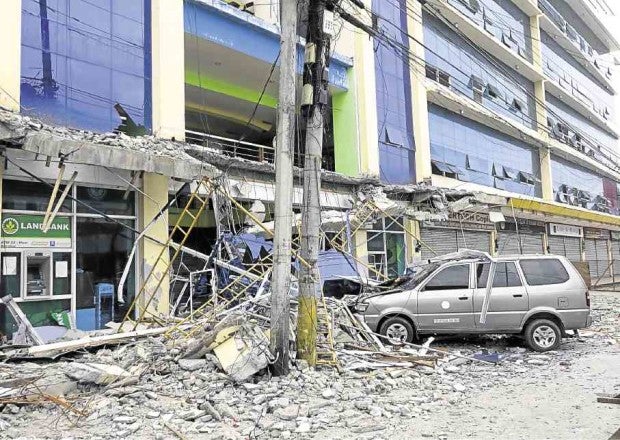 SURIGAO CITY – Power has been restored in some parts of the city, but water remains cut off since Friday night’s 6.7 magnitude earthquake.

The number of fatalities, meanwhile, has increased to seven, the updated list released by the City Disaster Risk Reduction and Management Council showed.

Repairs are still ongoing and water supply is expected to resume in some parts of the city by Sunday midnight, according to Kong. He estimated the damage at P1.7 million.

Power, meanwhile, has only been restored in some parts of the city as the local electric utility rushed to repair damaged power lines.

Currently, SMWD’s water rationing is complemented by several mining companies who brought their own water trucks to respond to the needs of over 100,000 residents.

The situation is worsened by several aftershocks that sent hundreds of people racing to higher ground, most of them leaving their homes and setting up makeshift tents for fear of a tsunami event.

Wilfredo Pantilo, 54, said he has heard assurances from local officials of the unlikelihood of a tsunami, but said he could not take chances with the safety of his family of seven.

“Nature is unpredictable and we never know. It’s better to be safe than sorry,” he said from their cardboard tent.

Pantilo said the lack of evacuation facilities situated on higher ground, such as in Barangay Lipata where some 500 people converged Saturday night, has forced residents to seek refuge even along the highly elevated roadsides.

President Duterte, meanwhile, arrived at noon in the city to distribute financial assistance to the families of seven victims who died during the tremor.