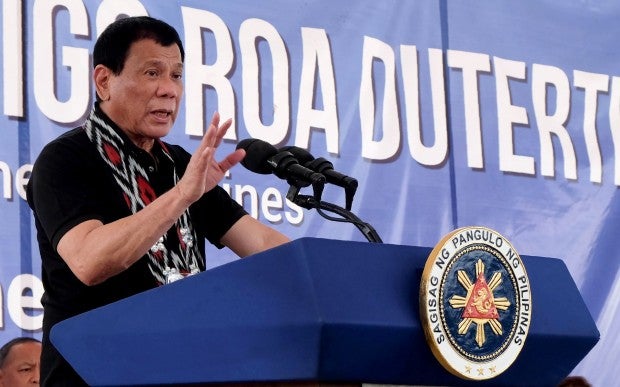 SURIGAO CITY – President Duterte said on Sunday his hands were tied over the fate of mining companies ordered closed by Environment Secretary Regina Paz Lopez, adding that the government might have to find alternative jobs for affected workers.

President Duterte, who was in the city to console victims of the magnitude 6.7 earthquake late Friday evening, said he was disheartened by the sight of denuded mountains and silted coastlines during a flyby en route here.

“I leave it up to Gina (Environment Secretary Lopez). If she says that the mines should be closed, then I can do nothing about it,” Duterte said in the dialect, adding he has already instructed Surigao del Norte Gov. Sol Matugas to prepare for potential massive jobs loss.

However, the President indicated he would keep an open mind on the 14 large-scale nickel mine sites ordered closed by Lopez, head of the Department of Environment and Natural Resources, saying he would make a final decision should he see that mining companies “are unable to restore the mountains back to their original state.”

Duterte also acknowledged the negative impact that mine closure would bring to thousands of employees, which has been estimated to affect 300,000 individuals in Caraga alone.

Caraga’s mining sector—currently the country’s biggest with 24 active large-scale gold and nickel mine sites—directly employs 13,090 regular workers, according to the regional Mines and Geosciences Bureau (MGB-Caraga).

The figure has not included workers of mine suppliers and other businesses that cater to mining firms, said MGB-Caraga Director Roger de Dios.

Taking into account the Indigenous Peoples’ (IPs) communities that would lose their royalty share from mining operations, De Dios and Dulmar Raagas, president of the Chamber of Mines-Caraga Region, Inc. (CMCRI), said the total number of affected individuals could go as high as 300,000.

“We’re not yet even talking about loss in taxes among local government units, many of whom depend on revenues derived mining operations,” Raagas said.

Local governments that host mining operations enjoy a 40 percent share in the 2-percent excise tax paid by mining companies from their annual gross revenues, on top of the business and real property taxes as well as regulatory fees that go directly into local coffers. 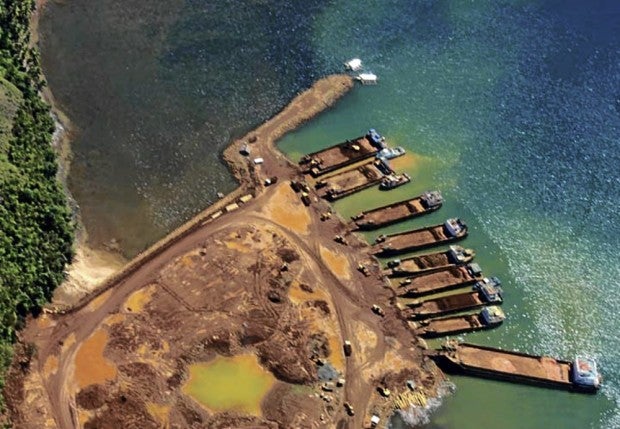 This is the port in Claver, Surigao del Norte, where minerals and mining products are loaded into barges. Surigao del Norte is known for its nickel ore areas. (Photo by DANILO V. ADORADOR III/INQUIRER MINDANAO)

From 2013 to 2015, revenues from excise taxes in the Surigao and Agusan provinces alone totalled P2.1 billion, MGB-Caraga records showed.

“Taxes from mining help us build new roads and infrastructure, and the economic benefits we get in the form of jobs for our residents as well as increased business activity are undoubtedly crucial for our growth,” Pichay told Philippine Daily Inquirer.

Officials in Dinagat province —a mineral reservation since the 1950s—aired the same sentiment.

Provincial Board Member Nilo Demerey said the province would lose P64 million in annual revenues, which has been constituting 75% of its yearly income. The province is home to nine large-scale nickel companies, seven of whom were ordered closed by the DENR.

“Dinagat has long been a declared mineral land because of its unique geographical makeup. If you take mining from us, we would surely die,” Demerey told Inquirer.

Datu Ben Tindogan of the Manobo tribe in Madrid town, Surigao del Sur, said the loss of Social Development and Management Program (SDMP) funds and their IP royalty share would make them the most vulnerable group if mining operations were to stop in their locality.

Datu Tindogan’s group is one of the many tribal groups that receive royalty share from mining operations, which is equivalent to 1 percent of a company’s gross sales. Last month alone, IP royalty payments in Caraga amounted to over P270 million, paid by 10 mining companies whose operations are within indigenous lands.

Tindogan said he and the 155 families have been beneficiaries of livelihood and health assistance, while some 160 of their children have been going to college through the full scholarships granted by the company.

“What will happen to our children if they lose the scholarships? What do we do if we lose our livelihood?” he said.

He added: “The answer is simple: we go back to our ways before mining arrived here, which means some of us will go back to “kaingin” (slash and burn farming) or illegal logging, and other will go to the mountains to become rebels.”  SFM