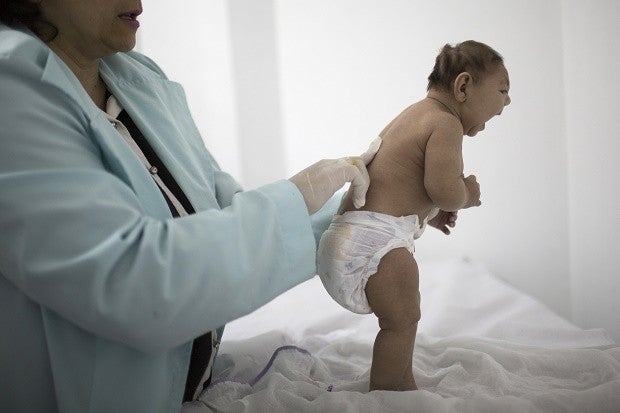 In this Friday, Feb. 12, 2016, file photo, Lara, who is less then 3-months old and was born with microcephaly, is examined by a neurologist at the Pedro I hospital in Campina Grande, Paraiba state, Brazil. AP FILE

The mother and newborn baby girl from the Western Visayas who were initially suspected of having contracted the Zika virus have tested negative in confirmatory tests.

The Department of Health (DOH) added that the baby girl’s microcephaly was not caused by the Zika virus as they first suspected.

DOH secretary Paulyn Jean Ubial said the Research Institute for Tropical Medicine (RITM) confirmed that the mother and her new born child were not infected.

“We have confirmation from the RITM received yesterday (Friday) afternoon. It’s negative after using real-time polymerase chain reaction,” she said in a text message.

Results of confirmatory tests at the RITM usually come out after 48 hours, Ubial said.

On Friday, the DOH said it was verifying reports that a mother from Western Visayas and her full term, newborn baby girl screened positive for the Zika virus through using a rapid diagnostic test.

The mother did not manifest any symptoms of Zika virus throughout her pregnancy and eventually gave birth by normal spontaneous vaginal delivery.

However, the baby’s head was smaller than usual. The baby was also born with encephalocoele, a rare type of birth defect of the neural tube affecting the brain.

The Zika virus is usually transmitted through the bites of the Aedes aegypti mosquito and through sexual contact. It is usually asymptomatic but has been linked to microcephaly.

Ubial said the mother had no other infections and that the other household members were not tested since there were no symptoms.

She added that the mother and her baby “absconded” or left the hospital after learning that they tested positive for Zika virus through the rapid test.

Data from the DOH showed that there are now 57 Zika cases in the country, seven of which are pregnant women.

Three of the pregnant women were from Metro Manila while the Calabarzon and Central Visayas had two each.

One woman from Las Piñas City gave birth to a baby boy at full term without microcephaly, while a woman from Central Visayas had a spontaneous abortion in the ninth week of pregnancy.