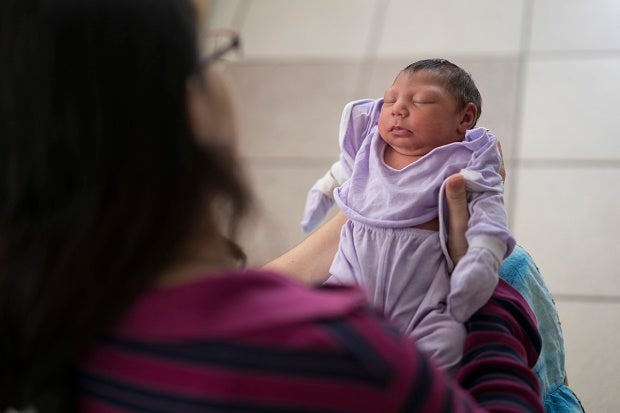 Cassiana Severino holds her daughter Melisa Vitoria, born with microcephaly at the IMIP hospital in Recife, Pernambuco state, Brazil, Wednesday, Feb. 3, 2016. The Zika virus is spread by the Aedes aegypti mosquito, which is well-adapted to humans, thrives in people’s homes and can breed in even a bottle cap’s-worth of stagnant water. The Zika virus is suspected to cause microcephaly in newborn children. AP

MANILA — A pregnant 16-year-old girl from Las Piñas City is among the latest victims of Zika virus infection, according to the Department of Health.

The 16-year-old patient was among the 10 new cases the DOH reported on Tuesday, but the DOH did not immediately divulge that the patient was pregnant because health officials were still awaiting confirmation.

The first pregnant woman from Cebu who contracted Zika virus has undergone two ultrasounds and showed no abnormalities in her pregnancy.

Of the 33 cases, 12 were recorded in Iloilo; four in Bacoor, Cavite; three cases each in Mandaluyong and Calamba, Laguna; two cases each in Antipolo, Las Piñas and Muntinlupa; one each in Cebu, Quezon City, Makati, Caloocan, and Manila.

Region 6 (Western Visayas) has the highest number of recorded cases in the Philippines, followed by the National Capital Region, Region 4-A (Calabarzon), and Region 7 (Central Visayas).

According to Ubial, only these four regions have recorded cases of Zika virus but the DOH, along with local government units and the Research Institute for Tropical Medicine (RITM), continue to monitor samples from regional offices nationwide.  SFM