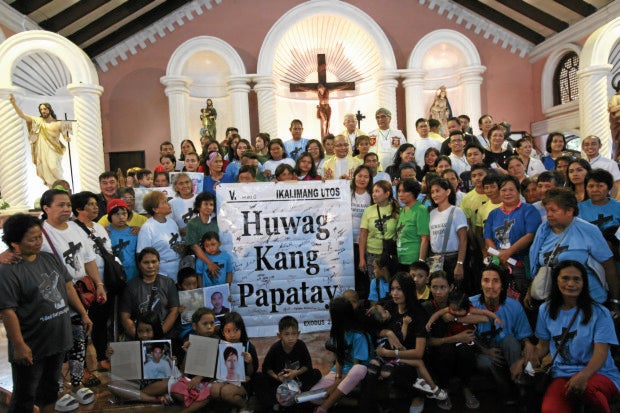 Relatives of victims of killings in the antidrug war condole with each other during a Mass held at the Our Lady of Victory Chapel in Malabon City. PHILIPPINE DAILY INQUIRER / NIÑO JESUS ORBETA

“It is good to remove the drug problem, but to kill in order to achieve this is also wrong.”

The Catholic Bishops Conference of the Philippines (CBCP) said on Sunday that it would always speak out against extrajudicial killings as it urged Church leaders to continue programs to help uplift the poor.

In a pastoral statement, the country’s bishops said they were “deeply concerned” about the many deaths and killings in the government’s war against illegal drugs.

“This traffic in illegal drugs needs to be stopped and overcome. But the solution does not lie in the killing of suspected drug users and pushers,” said CBCP president Socrates Villegas.

Villegas, the archbishop of Lingayen-Dagupan, signed the three-page pastoral statement in his capacity as CBCP president.

The pastoral statement, which was read in all Masses on Sunday, was the result of a three-day plenary assembly of the bishops last week.

Although prelates have individually spoken up against the spate of extrajudicial killings amid the war against illegal drugs, this is the first time that the CBCP made a collective stand on the issue.

President Duterte has made the illegal drugs campaign the centerpiece of his platform, but legitimate police operations, suspected internal cleansing of drug syndicates and alleged vigilante killings have left more than 7,000 dead so far.

The bishops stressed that they were one with Filipinos who want change but added change “must be guided by truth and justice.”

They expressed concern not only for those killed in the war against illegal drugs but also for the families left behind and the public’s “indifference” to the “reign of terror.”

“An even greater cause of concern is the indifference of many to this kind of wrong. It is considered as normal, and, even worse, something that (according to them) needs to be done,” the CBCP said.

They added: “To push drugs is a grave sin as is killing except in self-defense. We cannot correct a wrong by doing another wrong. A good purpose is not a justification for using evil means.”

The Philippines is a predominantly Catholic country with about 80 percent of the population professing membership to the Church. The rise in the drug problem and the apparent indifference toward extrajudicial killings come as the Church prepares for 500 years of Christianity in the Philippines in 2021.

The CBCP assured that it would continue to speak up on the thorny issue of extrajudicial killings even if they were persecuted for it.

The Catholic Church has been under attack by Duterte himself, repeatedly accusing members of the clergy of corruption and sexual abuses.

“We in the Church will continue to speak against evil even as we acknowledge and repent of our own shortcomings. We will do this even if it will bring persecution upon us because we are all brothers and sisters responsible for each other,” the CBCP said.
The bishops added that keeping silent in front of evil is being an accomplice to the evil, urging the faithful not “to allow fear to reign and keep us silent.”

“If we neglect the drug addicts and pushers, we have become part of the drug problem. If we consent or allow the killing of suspected drug addicts, we shall also be responsible for their deaths,” they said.

The CBCP also urged Church leaders to continue implementing programs on livelihood, education and health programs to uplift the poor, especially drug addicts who need healing and a new life.

“We will stand in solidarity and care for those left behind by those who have been killed and for the victims of drug addicts.  Let us renew our efforts to strengthen families,” part of the statement read.

The bishops warned that destroying other people’s lives is a grave sin and that the use of illegal drugs is a sign that a person does not value his own life anymore.

Filipinos, they stressed, must work together to solve the problem of illegal drugs and rehabilitate drug addicts as every person has a right to be presumed innocent until proven guilty.

The CBCP urged law enforcers to follow due process in catching, proving the guilt and punishing perpetrators of crimes.

The bishops pointed out that the root of criminality and illegal drugs was poverty, which must be addressed through the giving of permanent work and sufficient wages to workers and by strengthening the family.

The CBCP also called for the reformation of rogue policemen and corrupt judges, noting that the slow wheels of justice are among the reasons for the spread of criminality.

“Often it is the poor who suffer from this system. We also call upon elected politicians to serve the common good of the people and not their own interests,” they added. CBB/rga