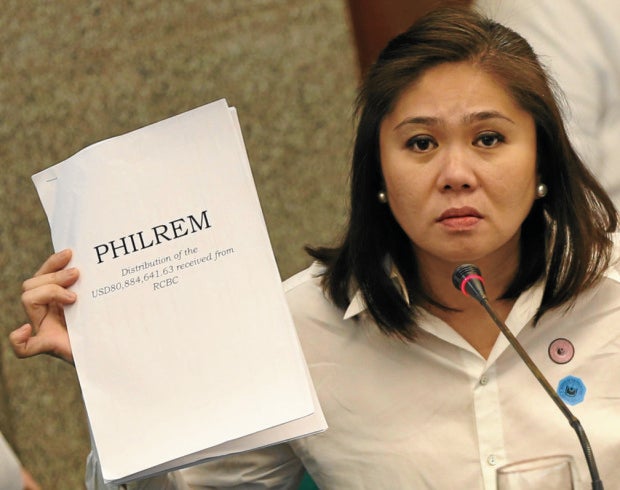 Salud Bautista of Philrem Service Corporation at the Senate Blue Ribbon Committee inquiry into the laundering of $81 million stolen from Bangladesh Bank which was deposited into bank accounts in RCBC’s Jupiter branch in Makati City. INQUIRER PHOTO/LYN RILLON

Salud Bautista, the president of Philrem Services Corp. embroiled in an $81-million money laundering controversy, was allowed by the Sandiganbayan to travel to Belgium to visit her uncle.

In a resolution, the anti-graft court Sixth Division granted Bautista’s motion to travel to Belgium via Paris, France from Feb. 7 to 19 to visit an ailing uncle.

This as she faces graft charges in the anomalous Werfast case of dismissed Philippine National Police (PNP) chief Alan Purisima.

Purisima, a friend of former President Benigno Aquino III, and 16 others have been charged with one count of graft for acting allegedly with manifest partiality, evident bad faith and gross inexcusable negligence when they awarded the courier contract to the firm Werfast Documentary Agency Inc.

Bautista was implicated as an incorporator of Werfast, which was in a joint venture with Philrem and CMIT Consultancy Group Inc.

The court set the usual conditions for Bautista before she was allowed to travel – she should post a travel bond of P30,000 and she should travel to no other place besides Belgium.

The court also required her to leave for Belgium not earlier than Feb. 7, and be back not later than Feb. 19. She was also required to present herself before the Clerk of Court within five days after her return.

The Sandiganbayan Sixth Division had found probable cause to try Purisima and his coaccused for graft and thus issued the arrest warrant.

Bautista is the last in their group to post bail after Purisima and the others paid their P30,000 for their provisional liberty.

Purisima voluntarily surrendered to the court even though the dismissed police chief was served his warrant of arrest upon arriving at the airport from Butuan City.

In filing the graft charge, the Office of the Special Prosecutor said Purisima violated Section 3(e) of the Anti-Graft and Corrupt Practices Act when he gave unwarranted benefit to Werfast.

Purisima entered into a memorandum of agreement with Werfast and accredited the firm as the PNP’s courier service provider for all firearms license applications despite its failure to comply with government regulations.

He and the respondents also approved the delivery by courier of firearms license as a mandatory policy in the PNP.

Bautista is the president of Philrem, the money remittance firm at the center of an alleged money laundering scheme where $81 million was allegedly stolen by hackers in the Bangladesh Bank and stashed in the Philippines. Bautista faces a money laundering complaint before the Department of Justice.

Graft is a criminal offense bailable upon posting P30,000 bond for each count.

Earlier, the Ombudsman dismissed Purisima, Petrasanta and others for the administrative offense of grave misconduct, serious dishonesty and grave abuse of authority. The officials were forfeited their retirement benefits and barred from being reemployed in government.

In ordering the graft charges, the Ombudsman said Purisima entered into a courier service contract with Werfast although the latter had no corporate existence and juridical personality when they entered into a MOA in May 2011.

The Ombudsman found that no public bidding was conducted, and the MOA was entered into although Werfast lacked track record as a courier service company.

Purisima and the other officials also admitted that the accreditation documents from Werfast were incomplete and met only the minimum requirements. The respondents also gave absolute credence to the company’s representative that it had a joint venture with CMIT Consultancy Group and Philrem.

The Ombudsman’s investigation also showed that Werfast engaged the services of LBC, which cost P190 for deliveries within Metro Manila and P290 outside, while other courier service providers charge only P90 within Manila.

Purisima was recently charged with sacked Special Action Force (SAF) Commander Getulio Napeñas for the Mamasapano carnage — graft and usurpation of powers for violating the police chain of command in the botched antiterror raid “Oplan Exodus” that resulted in the deaths of 44 elite cops in Mamasapano, Maguindanao. JE/rga