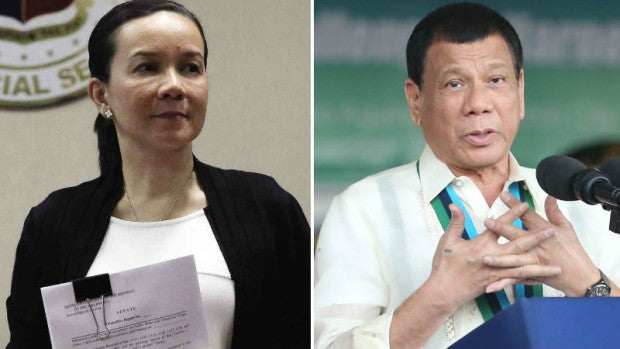 Describing the Supreme Court decision as “ridiculous,” President Rodrigo Duterte has insisted that Sen. Grace Poe was not a natural-born Filipino citizen.

“I do not really agree with the Supreme Court, yung sinabi nila na si Grace Poe, Pilipino (when it said Grace Poe is Pilipino),” he said in a speech on Saturday night during the reunion of the class 1961 Ateneo de Davao High School.

“Because for one semester pinag-aaralan namin yan sa (We studied that at the) College of Law, [that in this country] the only way you can be a natural-born is paglabas mo sa womb ng nanay mo, Pilipino ka. Pabalik-balik yan (when the baby comes out of the mother’s womb, you’re Pilipino…),” he added.

This was not the first time Duterte publicly mentioned his position that Poe was not a natural-born Filipino.

During the campaign period, he has repeatedly said Poe was not a natural-born Filipino citizen and should be banned from running for public office. Poe lost to Duterte in the May 2016 elections.

On September 21, 2016, the high court en banc upheld the decision of the Senate Electoral Tribunal (SET), declaring Poe a natural-born Filipino citizen and qualified to run for public office.

“So I cannot imagine how the Supreme Court arrived at that ridiculous…of adopting a treaty or agreement giving now the foundlings the citizenship of the country where they are found,” he said.

He recalled the ruling favoring Poe prompted him to change his mind and run for President.

“So that was actually the moment when I said, ‘Kung ganoon e di tatakbo nalang ako (If that’s the case then  I’ll just run [for president]),’” he said.

But the firebrand leader said he has nothing against the senator despite claiming that Poe disowned that they had a conversation during the campaign period.

“I have nothing against Grace, she’s a fine lady,” he said.

“I knew her sometime. But yung sinabi niya na hindi kami nag-usap, nag-usap kami. Nakalimutan lang siguro niya (But that’s her claim that we did not talk. She might have forgotten it),” he added, saying the conversation happened at the house of a mutual friend.

Duterte resurrected Poe’s citizenship issue and the high court’s decision after the senator assailed the administration’s brutal war on drugs.

“They said the fight against hunger is not sexy and the war on drugs is more exciting. Yes, we have a problem with that too but hunger – it is a problem of many. We should kill hunger, not the hungry,” she said in Filipino./ac