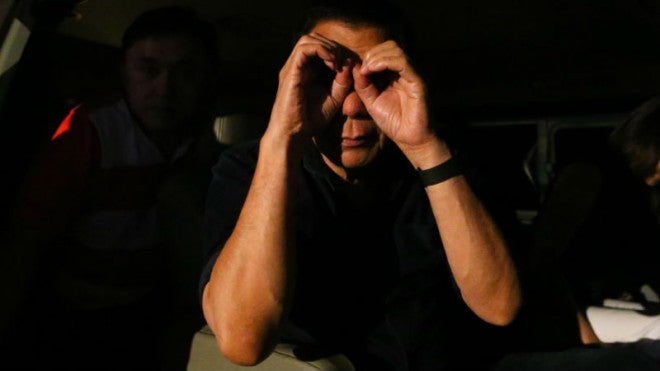 ESCORTED by motorcycle policemen, Davao City Mayor Rodrigo Duterte arrives at a private party in Dasmariñas, Cavite province, on Saturday night to announce that he would run for President in the 2016 elections. LYN RILLON

DASMARIÑAS, Cavite—Davao City Mayor Rodrigo Duterte on Saturday night said the decision of the Senate Electoral Tribunal (SET) to junk the disqualification case against Sen. Grace Poe pushed him to change his mind and run for President in next year’s general elections.

Poe welcomed Duterte’s decision, but Speaker Feliciano Belmonte Jr. doubted that Duterte could run because the presidential candidate of his party whom he intended to replace had already withdrawn from the race.

Dropping his strategy of ambivalence about a run for Malacañang that had put him high in the polls, Duterte, speaking at the birthday party of a friend here, declared his presidential candidacy was “now on the table.”

“I am running for President because I am so disappointed with the ruling of the Senate Electoral Tribunal,” Duterte said, drawing applause from former schoolmates, friends and supporters.

Voting 5-4 last week, the SET threw out a petition for Poe’s ouster from the Senate that had been brought by a 2013 senatorial race loser on grounds of citizenship.

“I cannot accept an American President,” Duterte said, referring to Poe, who renounced her US citizenship to be able to serve in the government under the Aquino administration in 2010.

Asked by reporters if he would run, Duterte replied: “Yes, I will run. But it is on the table.”

He explained that he had to speak with the leaders of his party, Partido Demokratikong Pilipino-Laban ng Bayan (PDP-Laban), about it.

Duterte’s ambivalence about running for President made PDP-Laban field a former village official from Quezon City, Martin Diño, at the close of candidate registration in June.

The party, however, had until Dec. 10 to change candidates and had been expected to announce a switch to Duterte even before Diño pulled out of the race because the Commission on Elections (Comelec) was poised to declare him a nuisance candidate.

Diño’s withdrawal left PDP-Laban in limbo, according to Belmonte.

As Diño had already withdrawn, “what’s there to replace?” Belmonte said on Sunday.

The Speaker said he doubted the Comelec would allow Duterte to run.

But Belmonte praised Duterte for deciding to run for President.

“He stands for something,” Belmonte said, citing Duterte’s tough enforcement of the law in Davao City.

Sen. Aquilino Pimentel III, president of PDP-Laban, said the party would now go all-out for Duterte after the Davao mayor had declared his candidacy.

“He is a phenomenon. We have a candidate who is strong and a potential winner,” Pimentel said.

The Comelec said it would study whether Duterte could run as substitute for Diño.

“The Comelec will study the matter if and when an actual substitution takes place,” said Comelec Chair Andres Bautista.

Poe’s camp said it welcomed Duterte’s decision to run even if it did not agree with the Davao mayor’s stand on the question of the senator’s citizenship.

“Though we are saddened and do not agree with the position of Mayor Duterte on Senator Poe’s citizenship and the status of [abandoned children], his decision to seek the presidency will make our democracy stronger and more vibrant,” Gatchalian said in a statement.

Not as welcoming was Poe’s running mate, Sen. Francis Escudero, who disagreed with Duterte’s view of Poe as not a natural-born Filipino because her biological parents were unknown.

Poe was abandoned in a church after birth and was adopted three years later by movie actor Fernando Poe Jr. and his wife, movie actress Susan Roces.

“Mayor Duterte does not need to hiss at Senator [Poe] and use the decision of the SET in her favor as an excuse to run,” Escudero said in a statement.

“In fact, quite the contrary, an unfavorable decision against Senator [Poe] could have been a putatively better excuse according to analysts,” he said.

Escudero reminded Duterte that the SET disagreed with his view and did justice to Poe and all other abandoned children.

“As the saying goes, those who have less in life should have more in law,” he said.

“This would give our voters more choices in 2016,” Binay’s spokesperson Rico Quicho said in a text message.

Caloocan Rep. Edgar Erice, spokesperson for the ruling Liberal Party (LP), said he believed Duterte decided to run because he expected the Supreme Court to rule against Poe on appeal.

“I think Mayor Digong believes that Senator Poe will eventually be disqualified. It’s almost a writing on the wall, and I think that he thinks he [has] a chance of winning without Senator Poe,” Erice said, using Duterte’s nickname.

Erice noted that the three Supreme Court justices on the SET—Associate Justices Teresita Leonardo-de Castro, Arturo Brion and Antonio Carpio—voted against Poe and their opinion could help turn the senator’s victory into defeat when the case went up to the high court.

Duterte said he thought Poe was “beautiful” and “good, cultured” and “has money.”

“But you don’t [stir up] emotion among the Filipinos just because you are a foundling. [That] is not good,” he said.

“When she gets disqualified because she is found to be American, what will happen to us?” he said.

He said Poe’s Filipino citizenship was based on presumption.

“Grace can run for governor or mayor, but not for [President]. Give me an Igorot, a Bagobo, as long as he or she is Filipino,” he said.

Duterte said he had chosen Cayetano as his running mate because the senator had been with him from the start and helped him “put up the propaganda.”

“This is a loose alliance,” Duterte said, noting that Cayetano is a member of the Nacionalista Party.

Sought for comment, Cayetano said: “I am speechless. Glory to God!”

Cayetano said that with Duterte in the race, the election would be easier for voters.

Duterte said his daughter, Sara, may take his place as candidate for mayor of Davao City. He said Sara also registered as mayoral candidate in June.

On his Sunday television program, Duterte challenged Poe to show him her Filipino mother and he would withdraw from the presidential race.

“I will no longer run. I’ll be her campaign manager,” Duterte said.

Asked by his cohost, Geraldine Tiu, if his decision was final this time, Duterte replied, “Yes.”

But he teased his viewers again, saying: “That was just for her, because she wanted me to say it.”

Duterte’s supporters celebrated his decision, beginning with a gathering on the soccer field on the University of the Philippines campus in Cebu City on Sunday.

At least 3,000 people joined the gathering called “Rock for Federalism,” referring to Duterte’s advocacy of a federal system of government.

The rally started at 1 p.m. and Paul Melendez, provincial information officer for the Duterte for President Movement, said it would run up to 10 p.m., with more people expected to come. With reports from Tina G. Santos in Manila; Allan Nawal, Inquirer Mindanao; and Jhunnex Napallacan and Carmel Loise Matus, Inquirer Visayas