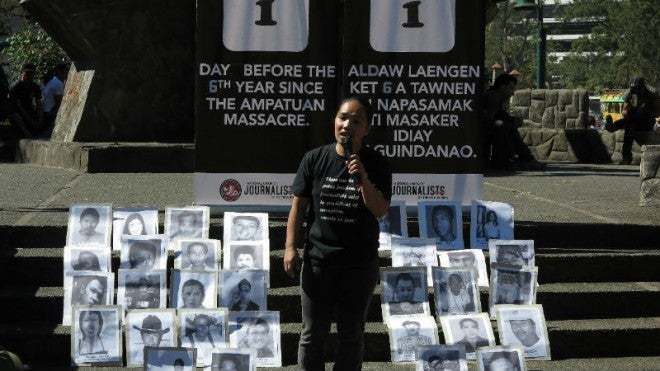 MASSACRE’S 6TH ANNIVERSARY Members of the National Union of Journalists of the Philippines gather at Igorot Park in Baguio City on the eve of the sixth anniversary of the Maguindanao massacre to remind the public that justice for the 58 people, including 34 media workers, who were murdered remains elusive. EV ESPIRITU/INQUIRER NORTHERN LUZON

GENERAL SANTOS CITY— Families of the victims of the Maguindanao massacre are losing hope they will get justice during the term of President Aquino.

In 2010, the President promised that if he got elected, the Maguindanao massacre case would be resolved under his term. Today, exactly six years after the massacre, Mr. Aquino has yet to keep the campaign promise.

Morales lost her husband, Rossell, and her elder sister, Marites Cablitas, in the massacre.

She said Mr. Aquino seemed to have forgotten all that he had pledged in the 2010 presidential election. And now, his anointed presidential candidate is mouthing empty rhetoric.

“Here’s another candidate (Mar Roxas) who promises an equal playing field for everyone even when the President failed to help the families of the victims. We are having difficulties fighting the moneyed Ampatuans,” Morales said.

The families rely on state prosecutors of the Department of Justice (DOJ) but they are not getting any case update from the DOJ, said the JNM secretary general.

Morales said JNM president Emily Lopez, the liaison between the DOJ and the families of the victims, claimed she had not received any communication from the department.

“Emily said she had not received an e-mail or anything from the DOJ,” Morales said.

Mangudadatu lost his wife, Genalyn, and some relatives and supporters in the massacre. At least 34 media workers were also killed in the carnage.

The victims were on their way to Shariff Aguak town to file Mangudadatu’s certificate of candidacy for governor when they were stopped by armed men, allegedly led by Datu Unsay Mayor Andal Ampatuan Jr., in Ampatuan town. The group’s convoy of six vehicles was then led to the interior village of Salman where armed men killed them.

Seven people in two other vehicles traversing the highway at the time of the crime and were tailing the convoy were also killed.

Mangudadatu, in a recent interview, said it was “disappointing” that six years after the killings, the court had yet to decide on the case.

“We already presented witnesses who testified that Unsay (Andal Jr.) and the other accused were the ones behind the massacre. What else does the court need?” he said.

Aside from Andal Jr., other members of the Ampatuan clan, including former Autonomous Region in Muslim Mindanao Gov. Zaldy Ampatuan, are in prison while being tried for the crime.

“It’s been six long, agonizing years. Where is justice?” Mangudadatu said, adding that the Ampatuan patriarch, Andal Sr., died without a court decision and jail sentence.

Another main suspect, Sajid Ampatuan, is out of jail after posting an P11-million bail.

Mangudadatu said the solicitor general had filed a motion for reconsideration on Sajid’s temporary liberty.

“I and the victims’ families were surprised that Sajid was allowed to post bail. I, personally, find it disgusting. How can he be allowed to post bail when witnesses have already testified that he was there when the massacre was being planned?” he said.

Sajid declined to be interviewed by the Inquirer.

Mangudadatu said the last time he attended a hearing was when Andal Jr. was supposed to take the witness stand, but his lawyers claimed the massacre’s prime suspect was suffering from a liver ailment.

Visibly dismayed, Morales said it was the duty of the government to ensure that the victims would get the justice they deserved. “My feeling right now is that the DOJ has deserted us.”

Morales refused to make any appeal to the Aquino administration. “I’m tired of doing that,” she said.

Morales and 13 other families of slain media workers were represented in court by Prima Quinsayas, lawyer of the Freedom Fund for Filipino Journalists (FFFJ) of the Center for Media Freedom and Responsibility.

FFFJ, however, has run out of funds. Quinsayas now works at the Office of the Regional State Prosecutor in Central Mindanao.

Morales is not giving up on the case. She said she was determined to fight to the end regardless of the outcome.

But some families, who are losing patience due to the protracted legal tussle, blamed Morales for preventing them from entering into an amicable settlement with the suspects.

“I did not stop them from entering into a settlement. I just reminded them to be cautious and make sure they get what they deserve. They may end up empty-handed,” she said.

Morales, however, is better off compared with Nancy de la Cruz, who lost her daughter, Gina, in the massacre. Gina left behind five children under De la Cruz’s care.

Morales has a job to support the daily needs of her three children. The National Union of Journalists in the Philippines supports the schooling of her teenage children.

The 65-year-old De la Cruz, in contrast, is not only jobless and getting older but is also suffering from health problems, like hypertension and arthritis.

During a recent visit by the Inquirer to her house in the crowded Labangal village here, De la Cruz looked desperate. Her variety store was almost empty. She’s living alone in a house without water and electricity.

“They cut my electricity and water supply because I could not afford to pay the bills. I have been without water and light since March. I use a gas lamp at night and ask the neighbors’ children to fetch water for me,” she said.

De la Cruz does not know where to get the P6,500 to pay her utility bills.

Her eldest granddaughter, Jergen, decided to live separately after getting married.

Her teenage granddaughters—Jergelyn, 15, and Jergisellie, 14—are now under the custody of the regional social welfare office.

Hunger and domestic woes drove Jergelyn and Jergisellie out of their home earlier this year. They joined a group of street children here where they were rescued by the social workers.

Another grandson, Ralp Genus, died from diabetes at the age of 9 sometime last year. The youngest grandchild, 7-year-old Winnie Giovanni, is now with his father.

“I’m alone here. I feel so lonely. It’s good that I can walk now. Last March, I was confined in the hospital because of arthritis,” De la Cruz said.

“I hope my two granddaughters are released from the [Department of Social Welfare and Development] regional office so they can accompany me here,” she added.

De la Cruz has another daughter, Maria Pilar, but she has deserted her.

“My grandchild, Jergen, brings me a kilogram of rice every week,” she said. “I’ll just, when the time comes, leave this world.”

Given her situation, De la Cruz said that if the offer was right, she was willing to settle her case amicably with the massacre suspects. With a report from Nico Alconaba, Inquirer Mindanao