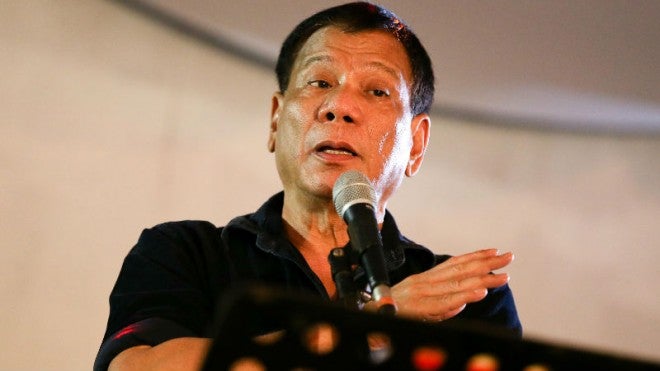 DASMARIÑAS, Cavite—Time magazine did not call him “The Punisher” for nothing.

But Davao Mayor Rodrigo “Digong” Duterte could turn it into entertainment, using the birthday party of a classmate in San Beda Law School on Saturday night to show his funny side and give glimpses of what his administration would be should he be elected President next year.

It was a night of thuggish humor, with Duterte holding court and sending the guests of birthday celebrator Fred Lim exploding with laughter every time he said “I will kill you.”

Those are the signature words of the lawyer-turned-politician who is known for his mailed-fist rule in Davao and is vilified by human rights groups for his alleged links to so-called death squads that cleared the city of thieves and drug addicts—though that has made Davao perhaps the safest place to live in the Philippines.

Duterte arrived at the party past 9 p.m. escorted by motorcycle cops. Lim introduced him to his guests as “the next President of the Philippines.”

In a speech laden with invectives and off-color words, Duterte announced that his presidential candidacy was “now on the table.”

Why? Because of the Senate Electoral Tribunal (SET) decision junking the disqualification case that a senatorial race loser had brought against Sen. Grace Poe on grounds of uncertain citizenship, he said.

And since the SET would impose a President on the Philippines whose citizenship was merely “presumed,” Duterte said he would rather proclaim the independence of Mindanao.

“I’m not ambitious. Roy Señeres is there,” he said, pointing to the OFW party-list representative who is seeking the presidency in next year’s general elections.

“Make him president of the Republic of Mindanao for a start. Maybe I can succeed him. If he does not want to vacate the post, that’s easy for me: I’ll have him killed,” Duterte said, drawing laughter from the guests.

Made fun of friends, enemies

Whether what he said was true or he just made it up, Duterte made fun of his friends and enemies alike.

He did not fail to mention his longtime enemy, former House Speaker Prospero Nograles, whom he and his daughter, Sara, had beaten in previous elections in Davao City.

“I am not used to soliciting help. With God’s grace, I never had a real opponent in the past elections. The only heavy opponent we, Sara and I, had trounced was Nograles,” he said.

“I wanted him killed but pity got the better of me,” he said, again making the guests laugh.

“I don’t want my cousin to be left a widow. So I said, ‘Not yet,’” he said then threw the punchline that sent the guests rolling down the aisles, “Pu— that Nograles.”

He said he told Sen. Alan Peter Cayetano, his running mate, to accept the vice presidency.

“I told Alan, don’t worry, accept the position of Vice President. I will take care of the President. Let’s kill him,” he said. “We will create a vacancy if necessary.”