Duterte:  Poe had asked to be my VP bet 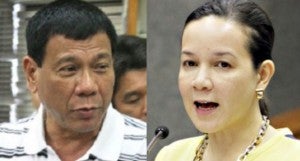 DASMARIÑAS, Cavite, Philippines — Davao City Mayor Rodrigo Duterte said on Saturday night, that Senator Grace Poe had asked him to be his vice president before the results of surveys put her in the lead of the presidential race.

“This is true whether she denies it or not. Alberto Romulo who is her neighbor in the Corinthian Gardens (Quezon City) mediated and asked if Grace Poe could be my vice president,” Duterte said during a birthday celebration of a friend here.

Romulo is the former foreign affairs secretary during the presidency of Gloria Macapagal Arroyo.

Duterte did not say when or where the meeting took place, but said Poe changed his mind when the survey ratings showed her to be the top presidential contender in the 2016 race.

“At the time, she already had an ambition. When the ratings came, I was told ‘Pakisabi kay mayor, tatakbo na lang daw siyang presidente.’ (Please tell mayor, she will just run for president.  SFM