Should ‘Bato’ quit over Korean’s slay? 3 senators say no 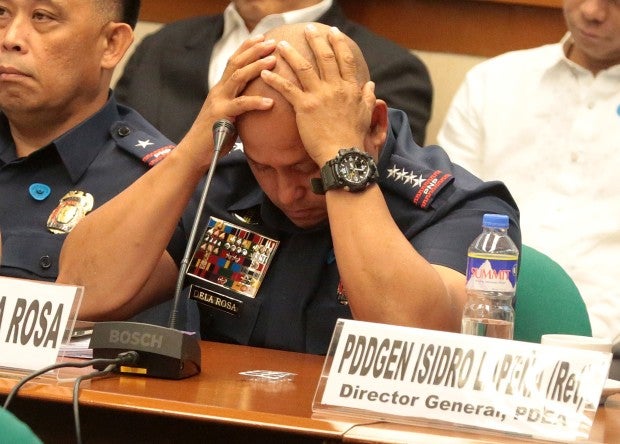 At least three senators believe that there is no need yet for Philippine National Police (PNP) Chief Director General Ronald “Bato” dela Rosa to resign even after criticisms for the reported killing of a Korean businessman allegedly by some policemen right inside the PNP compound.

“If he (Dela Rosa) enforces the law then no need. Let’s revisit the question if he’s “papatay-patay (lackadaisical),” Senate President Aquilino “Koko” Pimentel III said in a text message to reporters.

Senator Panfilo Lacson, chairman of the Senate committee on public order and dangerous drugs, also believes that Dela Rosa should not step down from his post.

“He should not,” Lacson, who also served as PNP chief during the time of former President Joseph Estrada, said in a separate text message.

“However, he should lose no time in addressing this issue by henceforth going hammer and tongs against all rogue cops who only care about their personal gains to the detriment of the entire police organization. Priority must be against those who take advantage of the President’s all-out, mostly bloody war against illegal drugs,” he said.

When he was PNP chief, Lacson said he targeted the “inept, corrupt and undisciplined policemen, regardless of rank, or what I referred to at that time as ICU’s.”

“My primary concern was to do justice to the sacrifices of the overwhelmingly many honest and hardworking police officers. Ronald knows that and I’m certain he knows how to do it because he was one of those at the forefront of our no nonsense internal cleansing of the police,” the senator said.

While Dela Rosa had already taken responsibility for the killing of South Korean businessman Jee Ick-joo, allegedly involving his own men, Senator Alan Peter Cayetano said the axe should fall on certain people under the PNP chief.

“I’m not calling for his courtesy or irrevocable resignation…I want to wait for the investigation . And I think, certain people under him (should) take the responsibility…” Cayetano said at a press conference in Taguig.

He said the killing was not only “tragic” but also “inexcusable” because the alleged perpetrators reportedly used the government’s anti-drug campaign to abduct the victim from his home in Angeles City, Pampanga province.

“I’m hoping that this will be a big, big wake up call to all agencies na subject to abuse talaga but that abuse should not affect the whole program…” Cayetano added. IDL/rga